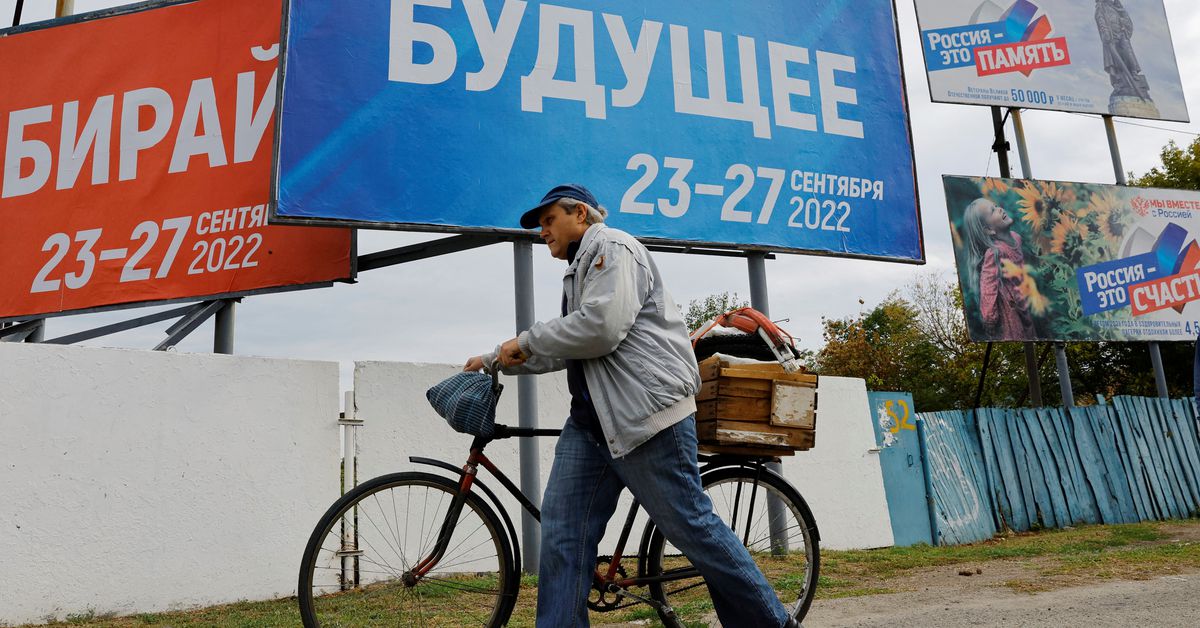 “We have lists of names of people who have been involved in some way,” presidential adviser Mikhailo Podolyak said in an interview with Swiss newspaper Blick.

“We are talking about hundreds of collaborators. They will be prosecuted for treason. They face prison sentences of at least five years.”

Podolyak said Ukrainians who were forced to vote would not be punished. Ukrainians officials have reported ballot boxes being taken door to door and residents being coerced into voting in front of Russian-backed security.

Moscow hopes to annex the provinces of Kherson, Luhansk, Donetsk and Zaporizhzhia, in the east and south, which make up about 15 percent of Ukraine.

None of the provinces are fully under Moscow’s control and fighting has been under way along the entire front line, with Ukrainian forces reporting more advances since they routed Russian troops in a fifth province, Kharkiv, earlier this month.

Russian President Vladimir Putin has issued a veiled threat to use nuclear weapons to protect Russian soil, which would include the four provinces if annexed.

Voting on whether to join Russia began on Friday in the regions and is due to end on Tuesday, with the Russian parliament possibly approving the annexation within days.

The British Ministry of Defence said on Tuesday that Putin is likely to announce the accession of the occupied regions of Ukraine to the Russian Federation during his address to parliament on Sept. 30. read more

Kyiv and the West have dismissed the referendums as a sham and pledged not to recognise the results.

Ukrainian and Russian forces were locked in heavy fighting in different parts of Ukraine on Tuesday.

Ukrainian President Volodymyr Zelenskiy said the Donetsk region in the east remained his country’s — and Russia’s — top strategic priority, with fighting engulfing several towns as Russian troops try to advance to the south and west.

There were also clashes in Kharkiv region in the northeast — focus of a Ukrainian counter-offensive this month. And Ukrainian forces pressed on with a campaign to put out of action four bridges and other river crossings to disrupt supply lines to Russian forces in the south.

A man walks with his bicycle past banners informing about a referendum on the joining of Russian-controlled regions of Ukraine to Russia, in the Russian-controlled city of Melitopol in the Zaporizhzhia region, Ukraine September 26, 2022. The banner (C) reads: “Future. 23-27 September 2022”. REUTERS/Alexander Ermochenko

In Russia, the call-up of some 300,000 reservists has led to the first sustained protests since the invasion began, with one monitoring group estimating at least 2,000 people have been arrested so far. All public criticism of Russia’s “special military operation” is banned.

Flights out of Russia have sold out and cars have clogged border checkpoints, with reports of a 48-hour queue at the sole road border to Georgia, the rare pro-Western neighbour that allows Russian citizens to enter without a visa.

Asked about the prospect of the border being shut, Kremlin spokesman Dmitry Peskov told reporters on Monday: “I don’t know anything about this. At the moment, no decisions have been taken on this.”

Russia counts millions of former conscripts as official reservists. The authorities have not spelled out precisely who is due to be called up, as that part of Putin’s order is classified.

The mobilisation has also seen the first sustained criticism of the authorities within state-controlled media since the war began.

But Sergei Tsekov, a senior lawmaker who represents Russian-annexed Crimea in Russia’s upper house of parliament, told RIA news agency: “Everyone who is of conscription age should be banned from travelling abroad in the current situation.”

Ukraine’s presidential adviser Podolyak said his country was well positioned to counter Russia’s mobilisation, with 700,000 men in reserve or fighting.

“We already have an effective army that is well positioned and has experienced forces,” he said.

Moscow says it wants to rid Ukraine of nationalists and protect Russian-speaking communities. Kyiv and the West describe Russia’s actions as an unprovoked war of aggression.

Late on Monday, Zelenskiy described the military situation in Donetsk as “particularly severe.”

“We are doing everything to contain enemy activity. This is our No. 1 goal right now because Donbas is still the No. 1 goal for the occupiers,” he said, referring to the wider region that encompasses Donetsk and Luhansk.

Russia carried out at least five attacks on targets in the Odesa region using Iranian drones in the last few days, according to the regional administration.

More U.S. funding looks to be on the way as negotiators of a stop-gap spending bill in Congress have agreed to include nearly $12 billion in new military and economic aid to Ukraine, according to sources. read more