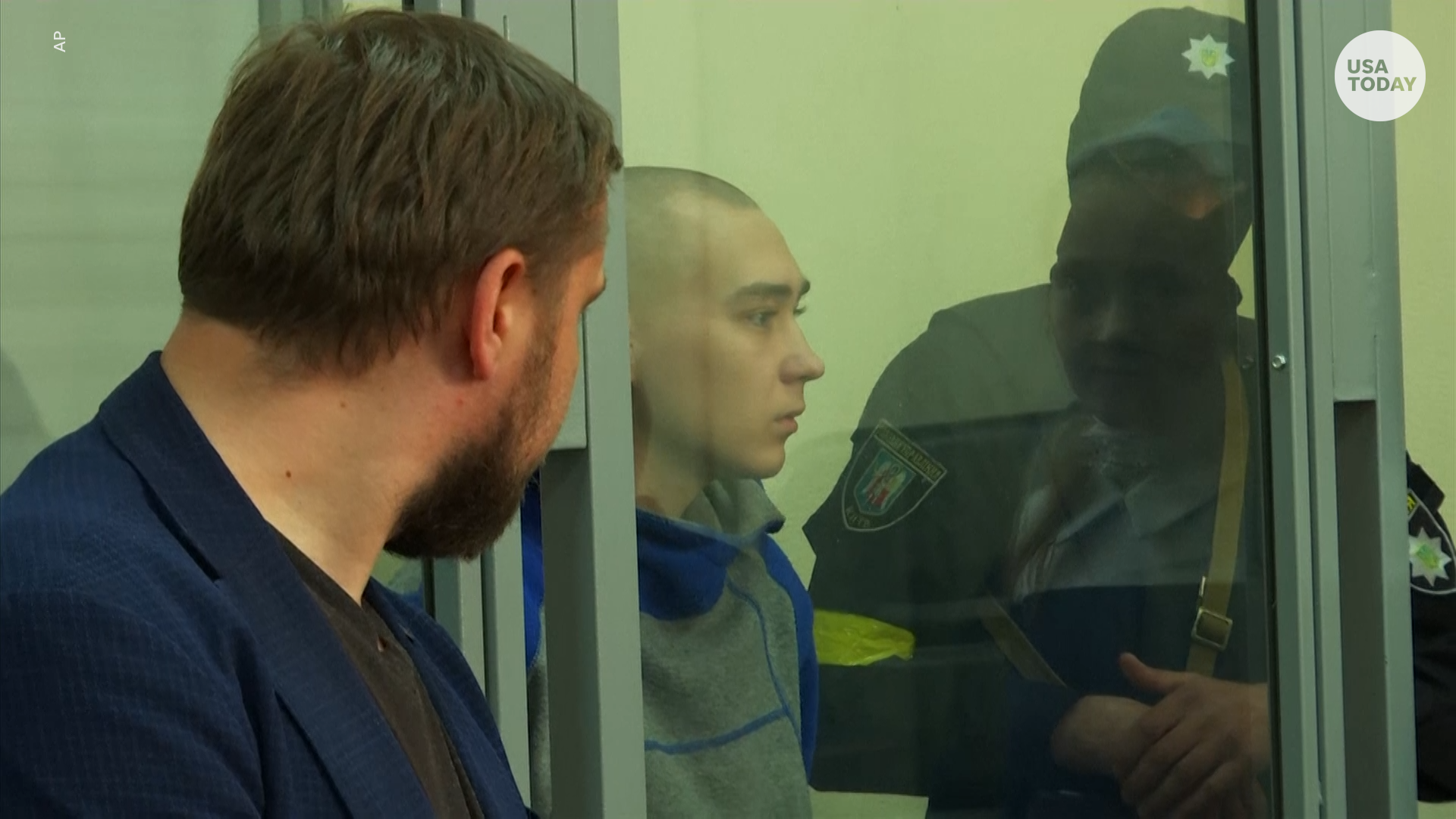 Russia’s defeat is ‘obvious to everyone in the world,’ says Zelenskyy

As Ukraine continues to fight off Russian forces, the first war crimes trial of a Russian soldier began in Kyiv.

A Russian soldier accused of killing a civilian appeared in a Kyiv courtroom Friday in what is the first trial for an alleged war crime since Russia’s invasion of Ukraine.

Sgt. Vadim Shyshimarin, 21, allegedly shot a 62-year-old man in the head in the northeastern village of Chupakhivka in the war’s first week. The member of the Russian tank unit faces up to life in prison under Ukrainian law.

Lawyers and judges briefly discussed procedural matters Friday. Defense attorney Victor Ovsyanikov said the court would be deciding on what evidence to allow in trial, but added that the case against the Russian soldier is strong.

Since the invasion began in February, more than 10,700 potential war crimes have come under investigation by Ukrainian Prosecutor General Iryna Venediktova. There are more than 600 suspects, including including Russian soldiers and government officials, according to her office.

USA TODAY ON TELEGRAM: Join our Russia-Ukraine war channel to receive the latest updates straight to your inbox

►Ukrainian Defense minister Oleksii Reznikov said in a Facebook post Friday the war with Russia had entered “a new, long phase.” “To win it, we must plan resources carefully, avoid mistakes and project our strength in such a way that the enemy ultimately breaks,” he added.

►WNBA star Brittney Griner on Friday had her detention in Russia extended by one month, her lawyer said. Griner has been detained for allegedly having vape cartridges with cannabis oil, but U.S. officials say she has been “wrongfully detained.”

U.S Dense secretary Lloyd Austin spoke on Friday with his Russian counterpart for the first time since before the Russian invasion of Ukraine, the Pentagon said.

Austin, who had not had a conversation with Russian Defense minister Sergey Shoygu since Feb. 18, “urged an immediate ceasefire in Ukraine and emphasized the importance of maintaining lines of communication,” Pentagon spokesman John Kirby said in a statement.

A Swedish government report on its potential NATO membership lists Russian cyberattacks as one of the numerous aggressive actions the country could face if it joins the military alliance.

The report published Friday comes as the Nordic country is weighing whether to join NATO and its neighbor in Finland said this week it wanted to be a part of the military alliance.

The Swedish report noted security benefits of NATO membership, but also said the country could be subject to hybrid attacks and violations of its airspace or waters.

Ukrainian Foreign Minister Dmytro Kuleba said Friday his country is still willing to negotiate with Russia over blocked grain supplies and a diplomatic solution to end the war.

Kuleba made the comments in Germany where top diplomats from the Group of Seven are meeting. Kyiv has received “no positive feedback” from Moscow, which “prefers wars to talks,” Kuleba said.

“We are ready to talk, but we are ready for a meaningful conversation based on mutual respect, not on the Russian ultimatums thrown on the table,” he added.

UNICEF on Thursday said nearly 100 Ukrainian children have been killed during the month of April alone, and the humanitarian agency estimates the death toll is likely much higher.

UNICEF Deputy Executive Director Omar Abdi said earlier this week that hundreds of schools across Ukraine have been bombarded by Russian forces. “In Ukraine today, education is also under attack,” Abdi said.

Millions of children have been displaced by the war, and the United Nations estimates that 6 million refugees have fled Ukraine since the start of the invasion in February.

Russian assaults in multiple eastern Ukrainian villages were not all successful, the general staff of Ukraine’s armed forces said in an operational update Friday.

Villages were targeted near Donetsk, Lyman, Bakhmut and Kurakhiv, and artilitary was also fired on Ukrainian troops near Novopavlovsk and Zaporizhzhia, the general staff said. Bombardment of the Azovstal steel mill in the besieged city if Mariupol continues, the Ukrainian miltiary said.

According to British defense officials’ assessment, Russian troops have not made significant advances in eastern Ukraine recently. Russian troops also suffered heavy losses when a column tried to cross the Siverskyi Donets river, west of Severodonetsk, on a pontoon bridge, the U.K. defense ministry said.

“Conducting river crossings in a contested environment is a highly risky maneuver and speaks to the pressure the Russian commanders are under to make progress in their operations in eastern Ukraine,” the British officials said in a daily intelligence update.

Ukrainian President Volodymyr Zelenskyy on Thursday night said the Russian military has damaged 570 medical facilities and fully destroyed 101 hospitals since the start of the war in February.

“They are cowards, and they try to hide the truth behind missiles, airstrikes and artillery shelling,” Zelenskyy said in a nightly video address to the nation. “Therefore our task is to fight until we achieve our goals in this war: to free our land, our people and secure our security.”

Zelenskyy also said that Russian forces struck the Chernihiv region and hit schools and condemned what he suggested were senseless attacks on the refinery in the central Ukrainian industrial hub of Kremenchuk, on the Zaporizhzhia region and the Donbas.