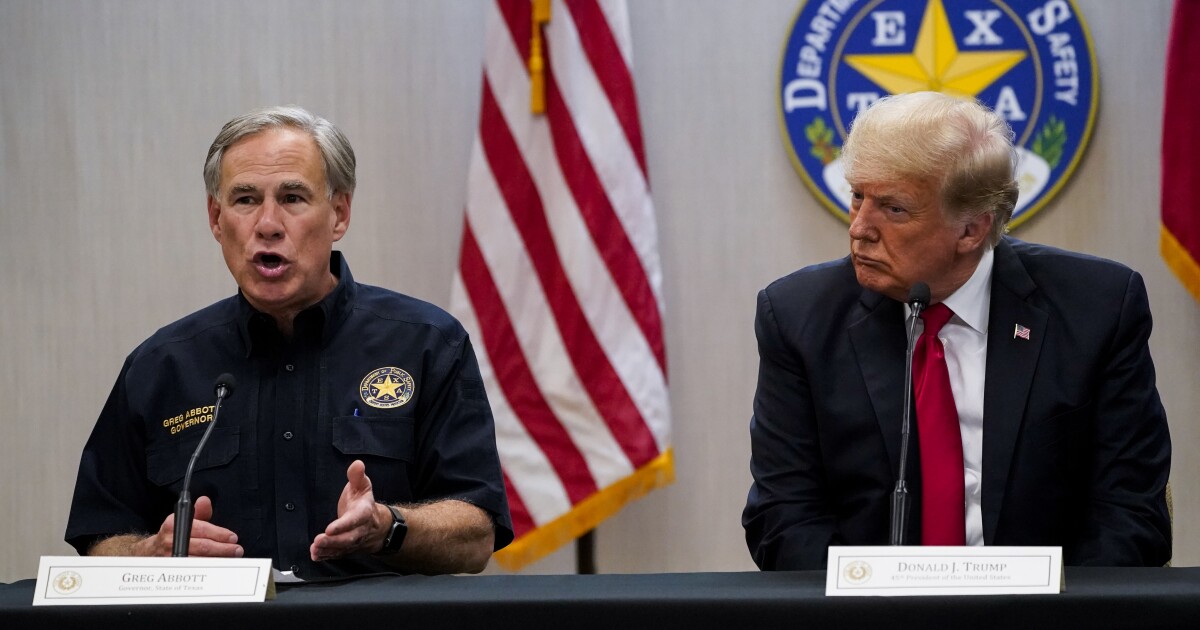 Say what you wish about the COVID-19 vaccines — and their safety and efficacy against the disease are established facts — their ability to turn Republican politicians batty is indisputable.

On Monday, Abbott issued an executive order barring “any entity in Texas” from imposing a COVID-19 vaccination mandate on any individual, including its employees or customers. The order applies to private companies and public agencies alike.

When you step back, the political polarization over vaccines is quite stunning.

Abbott’s order is manifestly political, a sop to the far-right-wing Republican base in his state. But its impact can’t be minimized. The order puts many employers, including nursing homes and other healthcare facilities, in a huge bind. That’s because many are subject to federal regulations requiring that all employees be immunized against COVID-19.

For example, consider the airlines Southwest and American, both of which are headquartered in Texas. They are subject to the federal mandate because they are both federal contractors. President Biden’s executive order of Sept. 9 requires the workforces of all federal contractors to be fully immunized by Dec. 8.

The administration is also requiring employees at all healthcare facilities that receive reimbursements from Medicare or Medicaid for treating those programs’ enrollees to be fully vaccinated. The Centers for Medicare and Medicaid Services is in the process of preparing a specific rule to cover that order, expected to be issued sometime this month.

Southwest told me by email that “according to the President’s Executive Order, federal action supersedes any state mandate or law, and we would be expected to comply with the President’s Order to remain compliant as a federal contractor.” American Airlines similarly said, “We believe the federal vaccine mandate supersedes any conflicting state laws, and this does not change anything for American.”

Many healthcare providers are dependent on Medicare and Medicaid reimbursements to stay afloat, Larry Levitt, the Medicare, Medicaid and Obamacare expert at the Kaiser Family Foundation, told me.

“It is financially untenable for hospitals and nursing homes to give up Medicare and Medicaid revenue,” he says. Plainly, that “could put them on a collision course with a state prohibition of vaccine mandates.”

Levitt and Andy Slavitt, the former head of Medicare and Medicaid services under President Obama, both conjectured that the discrepancy between the federal rules and Abbott’s order could end up in court.

But it’s hard to imagine any judge ordering the federal programs to make payments to healthcare providers that don’t meet the programs’ operations standards — at least making such an order stick.

The historical record indicates that the programs have wide latitude to establish criteria for reimbursements — reducing payments for providers that miss their goals, and raising them for those that meet higher standards.

Those criteria typically cover quality of care issues — and having employees on hand who could pass on a deadly disease to patients because they’ve refused a vaccine would certainly fall into the quality-of-care category, just for a start.

In any event, Slavitt told me, “There’s a pretty well established precedent for employers and others to require vaccines,” which raises the question of whether Abbott’s order is even legal. That question may well be up to a judge or judges, so any answer could conceivably emerge.

Abbott seems intent on tracking to the right on the COVID vaccination issue to protect his flank as he prepares to campaign for a third term in 2022. He’s facing primary challenges from candidates even more unhinged about COVID vaccination mandates than he is.

One is conservative former Texas state Sen. Don Huffines, who launched his primary campaign with an attack on anti-pandemic policies that he accused Abbott of implementing “at the behest of so-called ‘experts’ like Dr. [Anthony] Fauci.” Huffines pledged to “ban vaccine passports for all public and private entities in the State of Texas,” giving Abbott a mark to shoot for.

Also in the race is Allen West, a former GOP congressman from Florida and, until he announced his candidacy for governor in July, chairman of the Texas Republican Party.

West, who boasted of being unvaccinated, issued a series of intemperate, inaccurate and mendacious tweets about the COVID vaccines over the last few days from the hospital bed where he was recovering from a bout of COVID-19. He was released from the hospital on Monday.

“Instead of jabbing Americans, and not illegal immigrants, with a dangerous shot which injects them with these spike proteins … guess what? I now have natural immunity and double the antibodies, and that’s science,” he tweeted from the hospital.

It’s worth noting here that COVID vaccines do not inject “spike proteins” into recipients — that’s a common and wildly inaccurate claim by right-wing anti-vaccine activists. West pledged to “vehemently crush anyone forcing vaccine mandates in the Lone Star State” if he’s elected governor.

Abbott’s order aims to steal a march on his GOP challengers. Previously, Abbott barred public agencies, including cities, counties and school districts, from imposing vaccination mandates. That order is currently being challenged by the San Antonio Independent School District.

The latest order, which extends the ban to private employers, is designed as a challenge to Biden’s mandates.

“In yet another instance of federal overreach, the Biden Administration is now bullying many private entities into imposing COVID-19 vaccine mandates, causing workforce disruptions that threaten Texas’s continued recovery from the COVID- 19 disaster,” the order states. The order is to remain in effect until the Texas Legislature enacts a law along the same lines.

About 52% of Texas residents are fully vaccinated against COVID-19. That places Texas in the bottom half of all states. Abbott got vaccinated in public, and his executive order says “vaccines are strongly encouraged for those eligible to receive one.” But his resistance to vaccine mandates undermines that message.

“When you step back, the political polarization over vaccines is quite stunning,” Levitt says. He’s absolutely correct.

The press hasn’t helped by treating vaccination requirements as something new or contentious. Reuters, in its report on Abbott’s order, wrote that “laws requiring proof of vaccinations are deeply controversial in the United States, with many Americans criticizing them as unconstitutional and authoritarian.”

This is spectacularly incorrect. Vaccination mandates have been accepted, even welcomed, by parents of school-age children for more than a half-century.

Texas itself requires seven different vaccines, including polio, hepatitis, diphtheria/tetanus/pertussis, MMR and chickenpox for children in K-12 schools; eight vaccines for children in child-care facilities; and a meningococcal vaccine for college and university students.

In every category, proof of vaccination must be provided. Until the GOP right wing decided to cop an attitude over the COVID-19 vaccines, virtually no one ever heard a peep of complaint about those mandates. “Deeply controversial,” my foot.

Cynical politicians like Greg Abbott are placing their own political fortunes ahead of the interests of their own constituents by putting residents at risk of severe illness, hospitalization, long-term disability or death. Is there anything more misanthropic and sociopathic in our national politics?