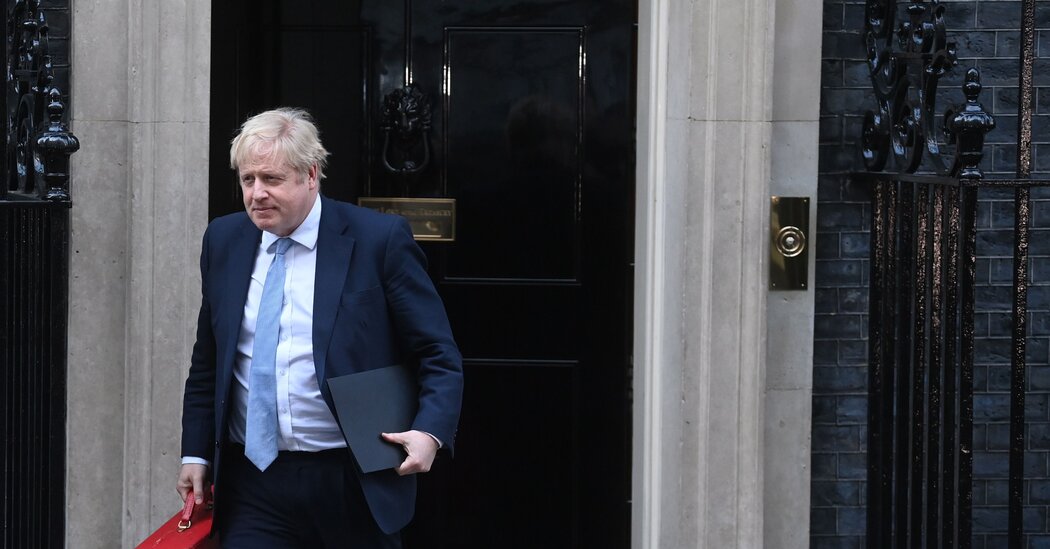 LONDON — A long-awaited report on parties in Downing Street during the pandemic dealt Prime Minister Boris Johnson a stinging blow on Monday, condemning him for failed leadership and painting a damning picture of “excessive” workplace drinking in the inner sanctum of the British government.

Mr. Johnson had hoped the release of the 11-page document would allow him to put a festering scandal over illicit parties behind him. But instead he was battered in Parliament, facing a new round of questions about his personal participation in social gatherings that appear to have violated lockdown rules meant to stop the spread of Covid-19.

Even in heavily redacted form, the report by Sue Gray, a senior civil servant, deepened the crisis that has engulfed Mr. Johnson for weeks, ever since reports of inappropriate gatherings surfaced late last year and raised a storm of criticism over a double standard: that the prime minister and his staff could flout the pandemic rules while insisting the rest of the country obey them.

In his bruising appearance in Parliament, Mr. Johnson faced a further call to resign from a senior member of his Conservative Party, as well as repeated demands to release the full report from the investigator — eventually forcing Downing Street to say it would.

Ms. Gray was forced to scrub the document of its potentially most damaging details because London’s Metropolitan Police is investigating eight parties, including one held in Mr. Johnson’s own apartment, and they did not want the findings to prejudice their investigation. Ominously, the police said late Monday that they had so far collected more than 500 pages of evidence and more than 300 photos.

Already confronting a revolt within his party, Mr. Johnson was forced to watch as Conservatives rose, one after the other, to scold him for allowing an unruly, alcohol-soaked culture to thrive in Downing Street. His predecessor as prime minister, Theresa May, summed up the gathering sense of opprobrium.

The British public, she declared, “had a right to expect their prime minister to have read the rules, to understand the meaning of the rules.” Arguing that the report clearly showed Downing Street had flouted pandemic restrictions, she asked Mr. Johnson if he “either had not read the rules, or didn’t understand what they meant, and others around him, or they didn’t think the rules applied to No. 10. Which was it?”

Mr. Johnson denied that the report found wrongdoing and pleaded with Mrs. May to wait for the completion of the police inquiry. After deflecting multiple questions about whether he would release Ms. Gray’s unexpurgated report after that — drawing heckles from the opposition and stony silence from his backbenchers — Downing Street relented late on Monday.

“I get it, and I will fix it,” a beleaguered Mr. Johnson said earlier. He insisted that his track record on Brexit and the rollout of coronavirus vaccines ought to outweigh what he conceded was his mishandling of this issue, for which he apologized once again on Monday.

Mr. Johnson’s contrition did little to calm the inflamed mood in the House of Commons. The leader of the opposition Scottish National Party in the British Parliament, Ian Blackford, was expelled after he bluntly accused Mr. Johnson of lying to members — a breach of parliamentary protocol.

For Mr. Johnson, the dramatic events upended his plans to pivot to crowd-pleasing announcements on the economy and government regulations, as well as to claim the mantle of a statesman in the mushrooming crisis over Ukraine.

A planned phone call with President Vladimir V. Putin of Russia did not take place, as Mr. Johnson instead faced 90 minutes of questions in Parliament. On Tuesday, Mr. Johnson is scheduled to travel to Ukraine for a meeting with President Volodymyr Zelensky, his most direct involvement in a crisis that until now, he has largely delegated to Britain’s foreign secretary and defense secretary.

Knowing that the report would be very limited in scope, Downing Street had hoped its publication would help dissipate public anger over lockdown parties and allow the government to move onto other issues. So abridged was the document that the Cabinet Office referred to it as an “update” of Ms. Gray’s investigation rather than as a report.

But the report painted a troubling portrait of a hothouse work culture at Downing Street, where staff members held alcohol-fueled gatherings through much of 2020, a period when the government was urging the public to avoid socializing, even with close friends and relatives.

All told, Ms. Gray’s report referred to 16 social gatherings at Downing Street and in nearby offices during lockdown periods. Mr. Johnson is known to have been present at least three of these, including a garden party in May 2020 that he has insisted he believed was a work event intended to thank staff members.

What’s at stake. The crisis has stoked speculations that the political future of Mr. Johnson might be at risk. Though few Conservatives in Parliament have publicly called on him to quit, if the investigation determines that he misled Parliament, it could cost him his job.

The report also alluded to a gathering held in Mr. Johnson’s apartment, which is above 11 Downing Street, on Nov. 13, 2020. That is the day that the prime minister fired his chief adviser, Dominic Cummings, who has since become Mr. Johnson’s archnemesis, leaking details about the turmoil and intrigue inside Downing Street.

Mr. Johnson has declined to comment on that party, which is under police investigation. London newspapers have taken to calling it the “Abba party,” since people outside said they heard “The Winner Takes it All,” a 1970s hit from the Swedish pop group wafting from the windows.

Some said Mr. Johnson might have been better served by putting more details into the public domain rather than leaving the issue hanging over him. Now, he remains beleaguered and fighting to hold onto his office, with more members of his own party turning against him.

During the debate, a senior Conservative lawmaker, Andrew Mitchell, declared he no longer backed Mr. Johnson. A younger Tory, Aaron Bell, spoke movingly about obeying all the rules while attending a socially distanced funeral for his grandmother, where he said there were just 10 people.

“I did not hug my siblings. I did not hug my parents. I gave a eulogy and afterwards, I did not even go into her house for a cup of tea,” he said, adding that he then drove three hours to get home. “Does the Prime Minister think I am a fool?”

Mr. Johnson has been scrambling to avoid a no-confidence vote by Conservative lawmakers. Such a vote would be triggered if 54 members submit confidential letters demanding it. That threshold has not yet been met, and Mr. Johnson appeared to have shored up his position in recent days, with the public outcry over the parties seeming to have ebbed.

But on Monday, said Tim Bale, professor of politics at Queen Mary, University of London, “It was very noticeable that not many Conservative members of Parliament were standing up to ask supportive questions even if loyalist ministers have fanned out to speak on his behalf in the media.”

Mr. Johnson’s future, Professor Bale said, now depended on how the public reacts to the latest disclosure. At Kings Cross Station in London on Monday, several people said they thought the government had betrayed the public’s trust.

“He broke his own rules,” said Joanna Ashby, 55, a nurse in the National Health Service. “I know people who died in lockdown. I had to attend their funerals virtually. My niece never had a graduation — it was taken away from her.”