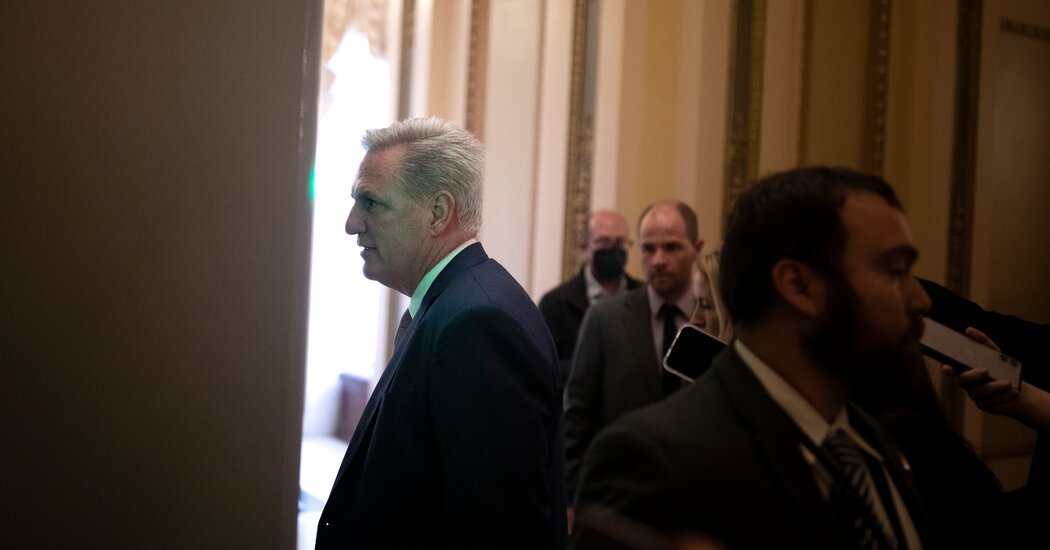 WASHINGTON — The decision by the House committee investigating the Jan. 6 attack on the Capitol to issue subpoenas to five Republican members of Congress, including Representative Kevin McCarthy, the minority leader, has sent a shock wave through Capitol Hill, heightening tensions in an already hostile environment and raising questions about the future of the inquiry and the institution itself.

The move by the Democratic-led panel set up a showdown with Republicans that could result in the threat of jail time against sitting members of Congress — including Mr. McCarthy, who is in line to be speaker if his party wins control of the House in November. It also had major implications for the investigation, and whether the country will ever get full answers about the deadly mob attack on the Capitol on Jan. 6, 2021, that disrupted the peaceful transfer of power and left more than 150 police officers injured.

Some Democrats immediately began clamoring for Mr. McCarthy and other lawmakers to be held in criminal contempt if they fail to appear at their scheduled depositions in late May, while Republicans warned of retaliation if they take control of the House after the midterm elections.

“I wouldn’t be for it, but turnabout is fair play,” Representative Thomas Massie, Republican of Kentucky, said of retaliatory subpoenas. He called the Jan. 6 committee’s subpoenas a “horrible precedent for the institution,” adding: “It’s a race to the bottom.”

The panel’s move to compel cooperation from Mr. McCarthy and Representatives Scott Perry of Pennsylvania, Jim Jordan of Ohio, Andy Biggs of Arizona and Mo Brooks of Alabama was a significant escalation that many on Capitol Hill called unprecedented in the modern history of congressional investigations. In the House, subpoenas are almost never issued outside of the Ethics Committee, which is charged with investigating allegations of misconduct by members. But it is also exceedingly rare for lawmakers to refuse outright to cooperate with an investigation.

“We’ve never had a situation where members of Congress participated or were suspected of participating in insurrection,” said Representative Jerrold Nadler, Democrat of New York and the chairman of the House Judiciary Committee, speaking to reporters on Capitol Hill. The Republicans “have a duty to testify. If they don’t testify voluntarily, they should be subpoenaed and the subpoena should be enforced criminally if necessary.”

Mr. Nadler said a contempt vote would be “the next thing that ought to be done” if the men do not comply with the subpoenas.

The Republicans under subpoena were discussing internally how best to respond to what they viewed as an egregious overreach by the committee, according to people familiar with their thinking who described it on the condition of anonymity.

All five have publicly criticized the committee as illegitimate, but privately, some concede that courts have upheld the panel’s subpoena power and have watched with concern as other uncooperative witnesses were referred to the Justice Department for prosecution.

The Republicans believe there is a clear political benefit to defying the committee — because former President Donald J. Trump’s base would almost certainly look favorably on the move — but some also are worried about weakening the authority of their own subpoenas if their party takes over Congress.

Mr. McCarthy has denigrated the committee’s investigation as politically motivated, and he repeatedly declined to answer questions on Friday. In recent months, he has been in discussions with William A. Burck, a longtime Washington lawyer, about how to fight a subpoena.

Top House Democrats said that they stood behind the committee’s decision, and wouldn’t duck any Republican subpoenas in the future.

“I’m not afraid of precedent. We’re seeking the truth. And we’re not going to be cowards about it,” said Speaker Nancy Pelosi of California.

“If they want to subpoena me at some point in time in the future, I will go in and tell the truth,” said Representative Steny H. Hoyer of Maryland, the No. 2 House Democrat. “Nancy Pelosi is subject to subpoena. Nobody is above the law. Nobody should be above the procedures of either this Congress or the courts. Period.”

Mr. Hoyer suggested Mr. McCarthy could address the subpoena very easily: “Simply agree to voluntarily come to the committee and tell the truth.”

Mr. Perry and Mr. Biggs are ordered to appear before the committee on May 26; Mr. Jordan is scheduled for May 27; Mr. McCarthy and Mr. Brooks are slated to testify on May 31.

The men each played central roles in the former president’s plan to use Congress to help him overturn the 2020 election.

For weeks, members and investigators on the special House panel have privately agonized over how aggressively to pursue sitting members of Congress, weighing their desire for information about lawmakers’ direct interactions with Mr. Trump against the potential legal difficulty and political consequences of doing so.

During those discussions, members were keenly aware of the potential for blowback, given that Mr. McCarthy has made no secret of his plans to retaliate against Democrats if Republicans win control of the House. He has named Representative Adam B. Schiff, a member of the committee, and Representative Eric Swalwell, both California Democrats, as potential targets.

But both men let it be known privately they understood the risks, and did not want the panel holding back on their behalf.

“I wanted it to be clear that I didn’t want to be protected if it meant not subpoenaing them,” said Mr. Swalwell, whom Mr. McCarthy had pledged to throw off the Intelligence Committee. “I shared this with a few members. Whether we subpoena them or not, they’re coming after me, is how I see it.”

Republicans have already begun planning a full slate of investigations in the event they take over the House, including how they could use subpoenas to target Democrats on a series of issues, according to two people familiar with the plans.

The subjects of those investigations are expected to include the president’s son, Hunter Biden, including his selling of artwork and business deals; Dr. Anthony S. Fauci, the government’s top infectious disease expert, and the origins of the coronavirus pandemic; Attorney General Merrick B. Garland’s initiative to address threats of violence and harassment directed at school administrators; the Biden administration’s handling of immigration at the southwest border; and the chaotic withdrawal of the U.S. military from Afghanistan.

Members of the Jan. 6 committee were reluctant on Friday to discuss the possibility of holding Mr. McCarthy and other Republicans in contempt of Congress, a step that would cause a criminal charge to be brought in front of a grand jury. They maintained they believed the Republicans would comply.

That charge carries a penalty of up to a year in jail and a $100,000 fine. The committee has recommended it be applied to four uncooperative witnesses, including Mr. Trump’s ally Stephen K. Bannon, who has since been indicted.

Representative Bennie Thompson, Democrat of Mississippi and the chairman of the committee, told reporters on Capitol Hill on Friday that if the men do not comply, another option beyond a contempt charge could be a referral to the Ethics Committee.

Mr. Thompson emphasized that if Republicans fail to honor the subpoenas and take over the House next year, they will have weakened their own investigatory powers.

“The precedent ought to be for Republicans to honor the subpoena,” Mr. Thompson said. “If Republicans choose not to, and then they take control of the House, then obviously they don’t have many legs to stand on.”

The committee has interviewed more than 1,000 witnesses and is preparing for a series of eight public hearings in June to reveal its findings. Mr. Thompson said more hearings could be added as the panel learns more information.

He added that subpoenas for other members of Congress, including senators, were still under consideration.