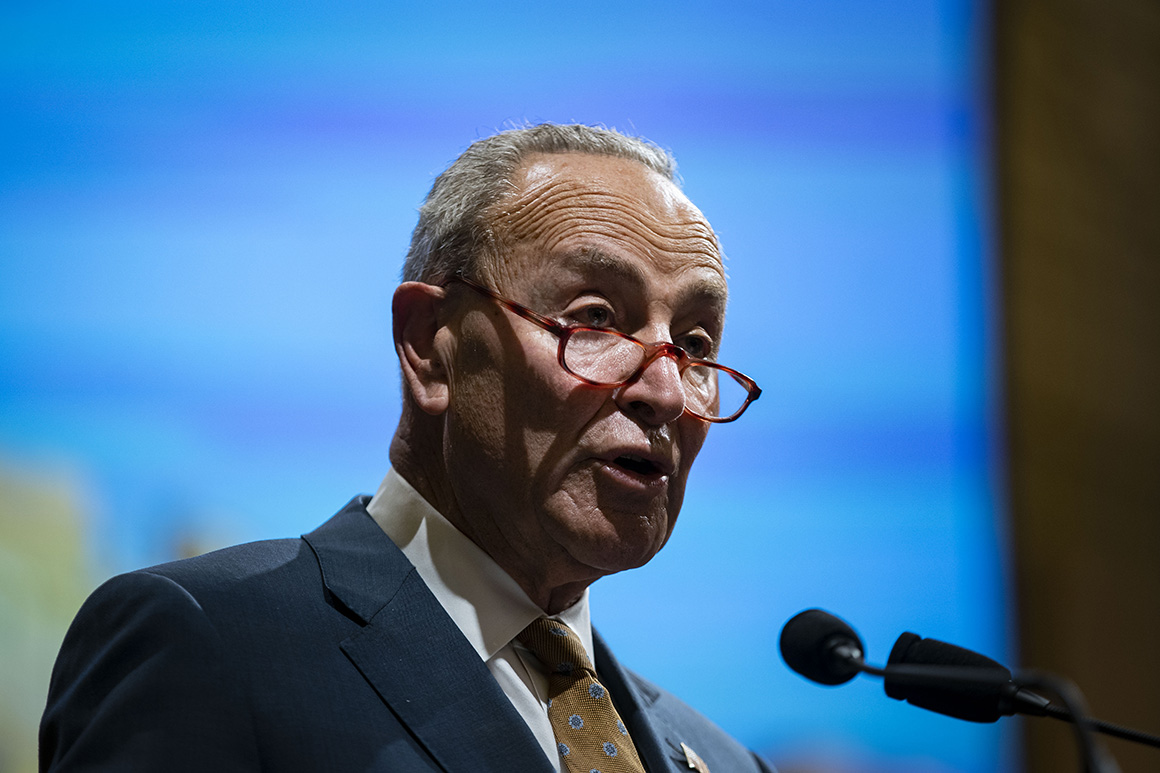 “The Senate will finally debate voting rights legislation, and then every senator will be faced with a choice of whether or not to pass the legislation to protect our democracy,” Schumer wrote in a memo, obtained by POLITICO, to Senate Democrats.

Schumer’s missive comes amid a torrent of activity among Senate Democrats to pass legislation cracking down on gerrymandering, making campaign finance reforms and creating national standards for early voting. President Joe Biden will attend a special caucus meeting with Senate Democrats Thursday as the party struggles over how and whether to weaken the filibuster to pass elections reform. And senators are furiously lobbying Joe Manchin (D-W.Va.) and Kyrsten Sinema (D-Ariz.) to back off their opposition to weakening the 60-vote requirement.

Even as Schumer vows to hold a vote on potential rules changes by Monday, Martin Luther King Jr. Day, he has yet to indicate what his final proposal to the caucus will be. That moment is now only a few days off, and Schumer’s tactics ensure that the voting and elections debate can at least come to the Senate floor unimpeded by a GOP filibuster. It will take just a simple majority to bring the bill to the floor, but 60 votes to end debate — unless Democrats change the Senate rules.

“To ultimately end debate and pass the voting rights legislation, we will need 10 Republicans to join us — which we know from past experience will not happen — or we will need to change the Senate rules as has been done many times before,” Schumer wrote. “How can we in good conscience allow for a situation in which the Republican Party can debate and pass voter suppression laws at the state level with only a simple majority vote, but not allow the United States Senate to do the same?”

Senate Democrats are weighing several potential changes, including reinstating a talking filibuster, creating a “carveout” that would allow the elections and voting legislation to pass by a simple majority and allowing the Senate to begin debate on a bill by a simple majority vote. They need all 50 Democrats on board to unilaterally weaken the filibuster.

No final decisions have been made, days before Democrats are slated to vote on the proposal.

“I really don’t know what the leader is thinking at this stage,” said Sen. Ben Cardin (D-Md.). “He has not shared that with us. A lot of us have had input. I’ve certainly let him know my views.”

And it’s clear Democrats don’t have the numbers to make rules changes along party lines, at least not now. Asked when Democrats need to come to a consensus, Sen. Jon Tester (D-Mont.) said: “As I told you for the last two months, yesterday would be great.”

“The truth is, at some point in time [Schumer’s] got to bring this to a head. And I think that’s why he’s having the vote,” he added.

Democrats are oscillating between voting on a talking filibuster or a carveout for elections reform, according to a senator familiar with the discussions. They may end up voting on both.

Some Democrats want to preserve significant sway for the minority and prefer a talking filibuster. That would still allow the minority to gum up the Senate for weeks, but senators would have to hold the floor to do so to stop a vote at a majority threshold. Others prefer the carveout, which would allow a quicker majority vote but pare back minority rights too much for some.

“Every 24 hours it feels like the conversation has shifted as we wrestle,” the senator said.

Biden will also be “working the phones” to try and sway what appears to be intractable opposition on the filibuster from Sinema and Manchin, the White House said. Biden will reiterate at Senate Democrats’ caucus meeting on Thursday that protecting the right to vote requires changing the Senate rules.

Schumer has warned senators they may have to stay in D.C. for the weekend, and some are expecting the vote to take place on Monday, despite a previously scheduled recess.

Sen. Martin Heinrich (D-N.M.) said Wednesday that the current negotiations “are in flux” but that he supports a talking filibuster.

“If you look at every other democracy in the world there are measures for the minority party to be able to slow things, but they don’t get a veto. So eventually they get a vote,” he said. “I think that’s key: that you have a path for a majority to enact policies to get to a majority vote.”

While they both support the elections reform bills, Manchin and Sinema have insisted for more than a year that they will not toss the Senate’s current 60-vote threshold. And Manchin has historically opposed changing Senate rules along party lines, an option known as going “nuclear.” And they’re not alone — other Senate Democrats also aren’t committing to changing the rules.

“I’ve got no new answers at all,” Manchin reiterated Wednesday morning. “Good meetings, good discussions.” He added that Biden gave a “good speech” in Georgia Tuesday, when the president made the case for changing Senate rules to pass voting reform.

Some progressives believe Sen. Mark Kelly (D-Ariz.) will end up supporting rules reform in the wake of his recent comments about his continued mulling over changes to the filibuster. Kelly said Wednesday he hasn’t committed to anything.

“I don’t pay attention to what progressive groups or any group is saying for that matter. I’m focused on doing the job for Arizona,” he said, adding that “there’s a bunch of different proposals” and “the rules the Senate operates under [are] not incredibly efficient.”

“In a world when you’re trying to secure the support of a small handful of members, you’ve got to be flexible,” said Sen. Chris Murphy (D-Conn.).