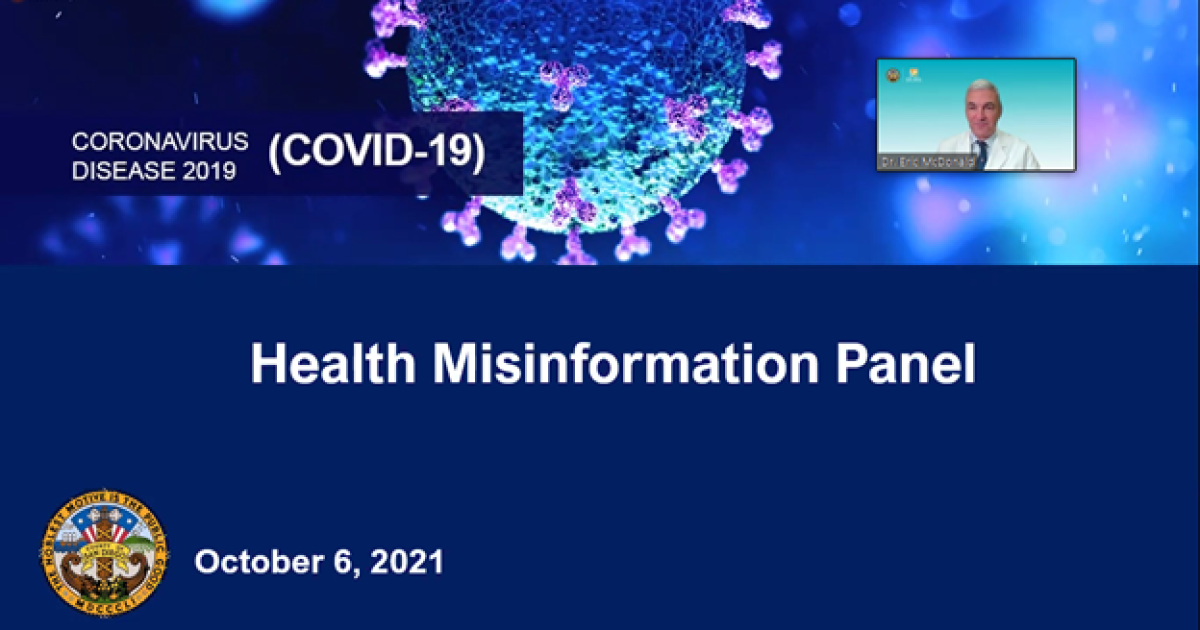 A panel of medical experts convened by San Diego County spent Wednesday morning debunking false claims about COVID-19 tests, treatments and vaccines in a bid by local officials to battle back against pandemic misinformation.

Four physicians took on everything from misconceptions that vaccines are more dangerous than COVID-19 to claims that case surges have been driven by faulty tests. Such statements have circulated for months, often via the Internet and social media, though the county has until now done little to confront them.

But the first-of-its kind event, which will take place after future Board of Supervisors meetings during which the county provides a COVID-19 update, reflects a realization that to control the spread of the coronavirus, public officials must also staunch the spread of misinformation.

Sawyer, who serves on a vaccine advisory panel for the Food and Drug Administration, kicked things off by reiterating what he’d shared during the Board of Supervisors meeting, showing that COVID-19 vaccines dramatically reduce a person’s risk of getting severe disease.

It’s a point reinforced by local data, too. On Tuesday, Dr. Wilma Wooten, the county’s public health officer, shared that at the end of August the hospitalization rate among San Diegans who weren’t fully vaccinated was 46 times that of those who were, 1.83 versus 0.04 hospitalizations per 100,000 people, respectively.

The infectious disease expert also pointed out that concerns around vaccine side effects have been largely overblown. That’s in part because people are misinterpreting reports submitted to the Vaccine Adverse Event Reporting System, a government database anyone can use. Health care providers are required to report any death after vaccination into this database, even cases unlikely to have anything to do with the shots.

Data from clinical trials and side effect reports linked to patient health records show that most vaccinated people don’t get much more than an achy arm, a fever and chills. And while serious side effects such as blood clots and inflammation of the tissue around the heart are real, they’re extremely rare and dwarfed by the number of COVID-19 deaths and hospitalizations prevented by the shots.

“People who say we don’t know what side effects this vaccine causes or the vaccine hasn’t been studied enough are not taking into account that we have given these vaccines to over 200 million people in the United States,” said Sawyer, adding that more than 6 billion doses have been administered worldwide.

Bakhtar, a Sharp pathologist, took on the idea that coronavirus false-positive tests results were artificially driving up pandemic statistics. While acknowledging that no test is 100 percent accurate, he pointed out that faulty tests wouldn’t explain surges in hospitalizations and deaths. He added that Sharp, the region’s largest health system, performs genetic sequencing on all its positive samples. Those efforts show a dramatic rise in the number of cases caused by the fast-spreading Delta variant. That wouldn’t be the case if positive tests were being triggered by lingering bits of virus in people infected months ago, before the Delta-driven surge.

Gyamfi-Bannerman addressed concerns around vaccines’ impacts on fertility and pregnancy, drawing on her knowledge as UCSD Health’s director of obstetrics, gynecology and reproductive sciences. She pointed to data showing that pregnant women who’d gotten vaccinated were no more likely than other women to have miscarriages, pre-term or stillbirths.

There’s an added benefit: Vaccinated mothers can pass coronavirus-fighting antibodies to their infants by breastfeeding. And at least one study shows that pregnant women who’ve been inoculated tend to have higher antibody levels than those who’ve recovered from infection.

Knowing the science has made it particularly painful for Gyamfi-Bannerman to see and hear of those who’ve passed up on their chance to get the shot, such as a 37-year-old Southern California nurse who died of COVID-19 shortly after giving birth to her fifth child.

“Those of us who only specialize in pregnancy and work with pregnant women are disheartened and a little frustrated in knowing that some of these cases that we’re seeing really every day could be prevented,” she said.

And Ramers drove home the point that, while most COVID-19 patients will recover, there are people who struggle to think clearly, breathe and perform basic tasks for months. And even focusing on survival alone shows the pandemic’s staggering toll after nearly two years.

“We have over 700,000 people that have died of COVID, surpassing the death rate of the 1918 influenza pandemic,” he said. “If this is not a public health emergency, then what is?”

The county has said it will make a recording available on its website, coronavirus-sd.com, and that it will issue a report following the session.

It’s unclear how many people listened to the panel discussion in real time. But there’s a larger and more pressing question — how many people can an event such as this one convince?

Just moments after the panel, Sawyer shared with the Union-Tribune that he knows there are many who won’t rush to get their shots after hearing from a group of medical experts.

“I’m not optimistic at all that this panel is going to change the minds of those people who are basing their reluctance to get vaccinated on conspiracy theory or dissatisfaction with the government,” he said.

Wednesday’s presentation didn’t allow for any direct back-and-forth between listeners and panelists. Sawyer said he’d be willing to participating in such a discussion, but he’s not sure there’s a way to do so that’s constructive.

“I’m open to exchange of information,” he said. “But it needs to be done in a reasonable way. And I am reluctant about giving a platform to people who are going to throw out information that is not scientifically valid.”