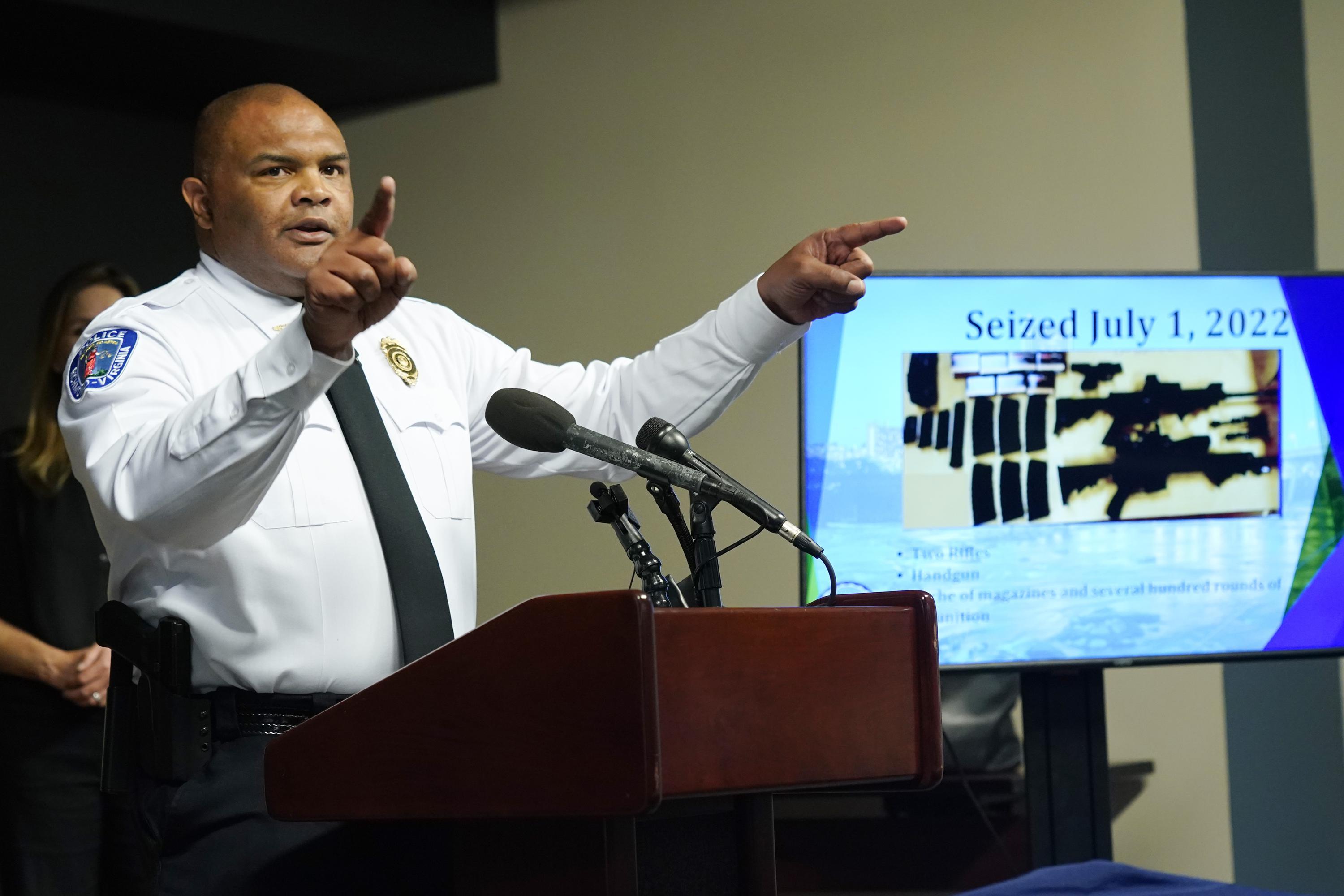 RICHMOND, Va. (AP) — Police in Richmond, Virginia, said Wednesday that they thwarted a planned July 4 mass shooting after receiving a tip that led to the arrest of two men and the seizure of multiple guns — an announcement that came just two days after a deadly mass shooting on the holiday in a Chicago suburb.

A “hero citizen” overheard a conversation indicating there was an attack being planned on an Independence Day celebration in the capital city and called police to report it, Police Chief Gerald Smith said at a news conference. The caller said the attack was planned for the Dogwood Dell Amphitheater, where an annual fireworks show is held, Smith said.

“One phone call saved numerous lives on the Fourth of July,” Smith said.

Police initiated an investigation along with the U.S. Department of Homeland Security and the FBI, which led to the arrests of two men on charges of being non-U.S. citizens in possession of a firearm, Smith said. He said additional charges are possible.

Julio Alvarado-Dubon, 52, was arrested on July 1, the same day police received the tip, Smith said. He said police put a second suspect, Rolman Alberto Balacarcel, 38, under surveillance beginning that day, but did not initially have probable cause to arrest him. He was arrested Tuesday in Albemarle County, near Charlottesville, and was being held in a local jail.

Police spokesperson Tracy Walker said both men are from Guatemala. Initial documents filed in General District Court in Richmond say both Alvarado-Dubon and Balacarcel are not in the U.S. legally. The documents said Alvarado-Dubon has an expired visa. The documents did not include any details about the alleged plot.

Smith said the two men lived together at a Richmond house, where officers seized two assault rifles, a handgun and hundreds of rounds of ammunition that were in plain view. He said police have not determined a motive for the planned attack.

Richmond Mayor Levar Stoney, who joined the news conference along with members of the city council, decried what he called an epidemic of gun violence across the country.

“Whether you’re at home in your cul-de-sac, or in your neighborhood, or in a park, or at a parade, out dining — you have to keep your head on a swivel,” Stoney said. “And that’s not the country that I know I desire to live in … but those are the facts of the matter at this moment.”

Court documents note bond was set at $15,000 for Alvarado-Dubon on Wednesday, but it was unclear if he had been released. The documents say he has lived in the Richmond area for three years and works full time in the construction industry. He has a preliminary hearing scheduled in Richmond on Aug. 2.

Online records showed Balacarcel was in custody in a local jail. It wasn’t immediately clear if he had an attorney who could speak on his behalf.

The apparent thwarted plot was planned for the same day that a gunman opened fire from a rooftop during a Fourth of July parade in the affluent Chicago suburb of Highland Park, killing seven people and injuring more than three dozen.

Robert E. Crimo III was charged with seven counts of murder Tuesday. The shooting sent hundreds of people fleeing in fear and set off an hourslong manhunt. Authorities have not yet identified a motive in that shooting.