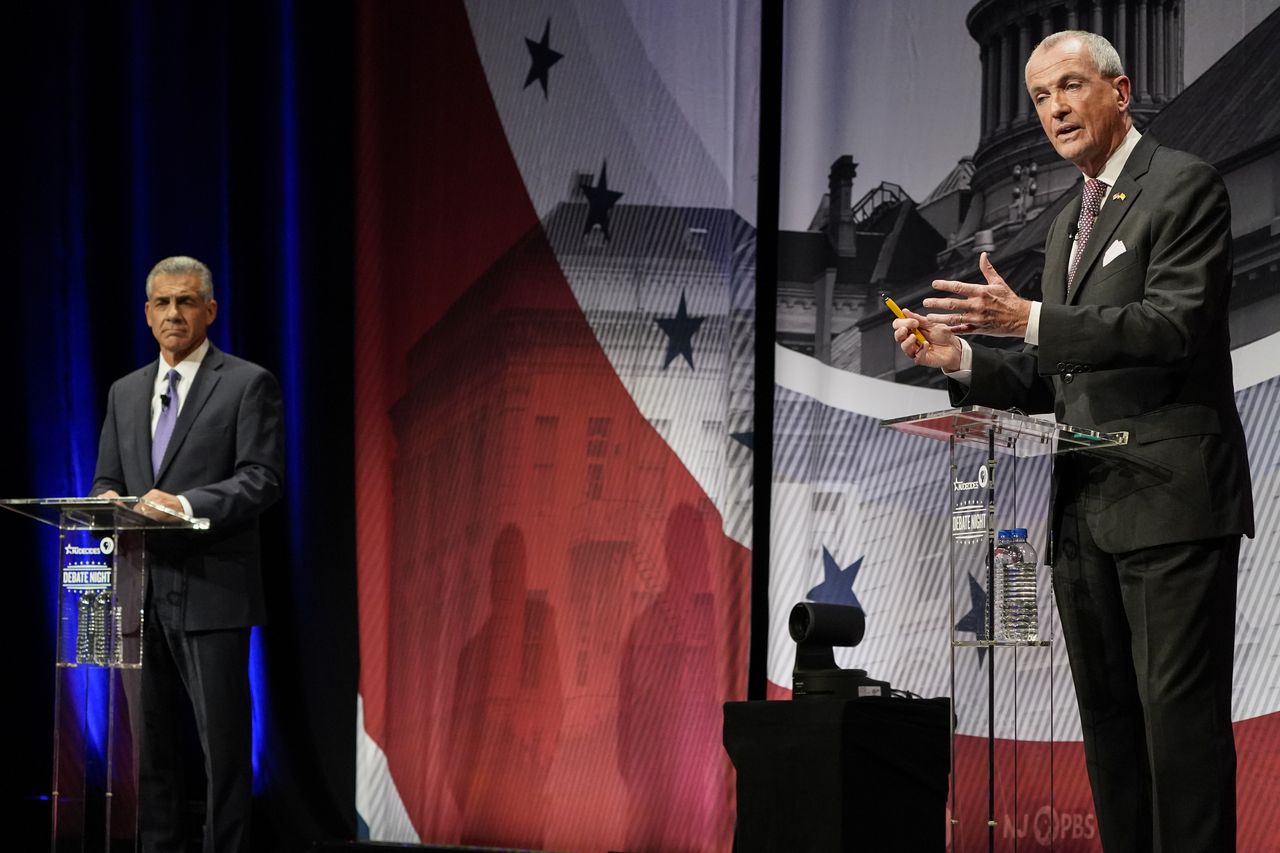 In their second, and final, debate before voters decide the New Jersey governor’s race in three weeks, Democratic Gov. Phil Murphy and Republican challenger Jack Ciattarelli on Tuesday night traded another set of bitter exchanges over COVID-19 vaccines and mask policies, school funding, and white privilege — while finding some common ground on abortion.

The hour-long event at Rowan University in Glassboro was nearly as feisty as the race’s first debate, with the candidates cutting each other with sharp retorts and the audience frequently butting in with applause, boos, and shouts.

It comes as Murphy, who is seeking a second term, continues to lead Ciattarelli, a former member of the state Assembly, in public-opinion polls, though the margin has thinned as the Nov. 2 election nears.

On Tuesday, both candidates continued to present starkly different visions for New Jersey’s future — starting with policies for how the state should handle the lingering coronavirus pandemic.

Ciattarelli insisted he personally encourages people to get vaccinated against the virus, though he maintained he is against vaccine and mask mandates because a “one-size-fits-all approach” doesn’t work.

“I believe that my role as governor when elected is to provide all the information people need to make an informed decision. And then the choice is theirs,” he said toward the beginning of the debate, co-sponsored by NJ PBS, WNYC, and Rowan University.

Murphy argued Ciattarelli would put lives “needlessly at risk” through his COVID-19 policies.

“This feels like a debate in Texas or Florida,” the governor said.

Ciattarelli also slammed Murphy over recent reports the governor and other attendees did not wear masks at an indoor ball hosted by Garden State Equality in Asbury Park this past weekend.

Attendees were required to present proof of vaccination or a negative COVID-19 test to get in. But Monmouth County currently has “high” rates of coronavirus transmission and masking is recommended in such a setting, according to the U.S. Centers for Disease Control and Prevention.

While Murphy has lifted statewide mask mandates, he has urged people to wear masks in settings of high risk. And Republicans have accused the governor of being hypocritical for not wearing a mask at the event when children are required to wear masks in school and daycare.

“I do think our leadership needs to be consistent in times such as these,” Ciattarelli said.

Murphy suggested he did not wear a mask because he was on stage speaking. He stressed he often takes off his mask on stage at public events, such as his COVID-19 briefings.

“Are you wearing a mask right now? We’re on stage,” Murphy said to Ciattarelli.

Ciattarelli countered: “He was at a large indoor gathering. Nobody had a mask on.”

The governor was also pressed on why he has not yet fulfilled his promise for a review examining how the coronavirus pandemic was handled in the state’s nursing homes and long-term care facilities, where more than 8,500 people have died from COVID-19.

“The challenge is we’re still in the middle of a pandemic,” Murphy said. “There will be be a full accounting, without question, independent of my office, on this.”

But Ciattarelli did not directly answer what programs he’d cut, instead saying he would work with the state Legislature to figure that out.

“We will all sit down together, tighten the belt and find places to cut,” he said. “I will tell you that state government is bloated, inefficient, and corrupted by special interest.”

Murphy touted how his administration has increased funding for public schools and recently made a $6.4 billion payment to the state‘a traditionally under-funded public-worker pension system. He also blamed Ciattarelli and previous lawmakers for not providing enough funding in the past.

”We inherited a complete and utter mess, and you were there for six years before I was,” Murphy said.

Ciattarelli countered: “The budget’s up by $11 billion. People don’t want a handout, they want a hand-up.”

“That is offensive,” Murphy responded. “That’s another example of forward-backward. A handout? Come on, man.”

Ciattarelli defended his school funding plans against criticism that it would cut court-mandated funding to poorer districts, saying the owner of a million-dollar home in Jersey City is paying less in property taxes than someone who owns a $400,000 home elsewhere.

“That’s not fair,” he said. “We need a flatter, more equitable distribution of aid.”

Murphy said that would hurt poorer students, especially in communities of color.

The next governor also has the chance to appoint four new members to the state Supreme Court. Ciattarelli suggested he would nominate justices willing to re-examine both school funding and the Mount Laurel decision, which requires towns in New Jersey to build affordable housing.

“I am looking for people who are going to bring balance to the court,” he said.

Murphy continued his effort to suggest Ciattarelli is a supporter of former President Donald Trump who will take New Jersey “backwards.”

Ciattarelli countered by saying Murphy is prone to blaming Trump or former Gov. Chris Christie — both Republicans — for problems in the state.

“I promise you this: When I take office in January, I will not blame the Murphy administration for anything,” Ciattarelli said. “We’ll get the job done.”

Ciattarelli, who has been criticized for drifting rightward after a relatively moderate career in the state Legislature, was also pressed Tuesday on why has supported Trump despite calling him “a charlatan” in 2015. Ciattarelli pushed back, beginning with a joke.

“In 27 years of marriage, I want you to know Melinda’s called me worse than a charlatan a few times,” he quipped, referring to his wife.

In addition, Ciattatelli praised Trump for how he handled the economy, border security, being “tough” on China, and moving the U.S. embassy in Israel to Jerusalem, which broke decades of American policy. He said he disagreed with Trump on offshore drilling, funding for the Gateway Tunnel project, and ending state and local property taxes deductions above $10,000.

But Ciattarelli didn’t say whether he would support Trump if he launched another White House bid in 2024. And he wouldn’t say if he’d welcome the former president with open arms if Trump offered to stump for him.

“I go out there and campaign on my own,” Ciattarelli said.

The U.S. Supreme Court all but made abortion illegal in Texas after it declined to hear a case that made its way up through the legal system, and Murphy said that should cause alarm among women in New Jersey and across the country. The governor has said the state Legislature should act now to pass the Reproductive Freedom Act in New Jersey, which would enshrine the rights into state law.

“This has gone from something that I think folks thought was abstract and theoretical to here and present danger,” Murphy said.

Ciattarelli has said women should have a right to choose, though he supports a ban on abortion after 20 weeks of pregnancy. And he said Tuesday he doubted the Supreme Court will overturn Roe vs. Wade, which gives women the right to an abortion in the U.S.

But he said he would support writing a state law to enshrine the protections of Roe vs. Wade in New Jersey if it is overturned.

“If that’s what we need to do here in New Jersey to protect a woman’s right to choose, we will do that,” Ciattarelli said.

Murphy said he will be “very happy” if Ciattartelli is right about Roe v. Wade.

“But I’m not expecting that, frankly, with the Trump-packed Supreme Court,” the governor said.

In another moment, Murphy took a swing at his opponent over a recent interview radio interview in which Ciattarelli declined to answer a question from a caller who asked him to define “white privilege.”

“We’re the most diverse state in America, and if you don’t know how to answer the question, it’s hard to believe that you can govern the place,” Murphy said.

“And I believe that I’m addressing it by going into the Black communities with the plan I put forth on my website,“ he added. “It’s very specific with regards to economic development, access to health care, solving the food desert program, and working with faith-based organizations.”

Murphy shot back: “White privilege is real. The legacy of slavery is not a historical element. Let’s not debate whether it exists, let’s accept it, sadly, and let’s do something about it. We’re the most diverse state in America — you got to get that.”

As for the raucous crowd? Murphy appeared bothered at times.

“A debate has broken out at a hockey game,” the governor said at one point.

The debate ended with Ciattarelli supporters jeering Murphy as he gave his closing statement.

“The audience was rowdy,” Ciattarelli told reporters after the event. “We applaud their enthusiasm, but it made it more challenging. … I got my point across, but the whole process was a little bumpy.”

Our journalism needs your support. Please subscribe today to NJ.com.