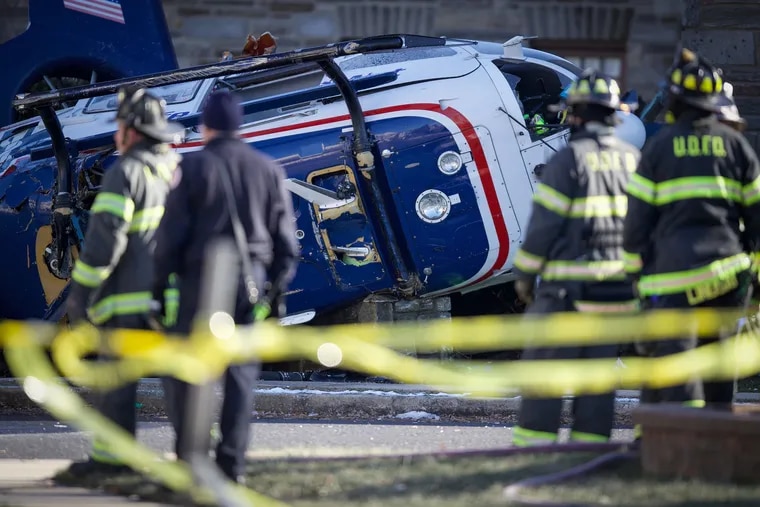 A medical helicopter carrying an infant crashed Tuesday in a residential neighborhood in Drexel Hill, leaving the four passengers with non-life threatening injuries, according to local authorities.

A LifeNet medevac helicopter transporting the child to the Children’s Hospital of Philadelphia went down at 12:55 p.m., according to authorities and the Federal Aviation Administration.

Flight transportation logs show the chopper — a Eurocopter EC135 — departed from Hagerstown, Md. at 10:29 a.m. It stopped at WellSpan Chambersburg Hospital in Chambersburg, Pa., Franklin County, before departing again for Philadelphia at 12:05 p.m.

Fourty-nine minutes later, it rapidly descended, crashing into the street at Bloomfield Avenue and Burmont Road, then skidding into the side of Drexel Hill United Methodist Church.

The four passengers — which included the child patient, pilot, nurse, and a medic — self-evacuated the helicopter, and did not suffer life threatening injuries, authorities said.

The child was taken to CHOP by ambulance. The pilot was transported to Penn Presbyterian Medical Center. The nurse and medic did not require medical attention, authorities said.

“We have no information on how the crash occurred, but I will tell you that [the pilot] did a great job of landing that helicopter without taking any telephone poles down, damaging any structures, and again no loss of life,” said Derrick Sawyer, chief of Upper Darby Township Fire Department.

There are no reports of any bystander injuries, and the church did not sustain any structural damage.

The FAA and National Transportation Safety Board are investigating the cause of the crash, an FAA spokesperson said.

Katie Spielman, 61, was watching the news in her Drexel Hill home Tuesday afternoon when she and her husband heard a loud sputtering outside for about 10 seconds.

“It sounded like just a very big engine that was kind of misfiring, like pop-pop-pop-pop,” Spielman said.

Ten minutes later, they saw the scene three blocks away from their home splashed across the television screen — a crumpled, smoking helicopter sprawled on the church lawn, near the typically quiet, two-lane road.

That no one was seriously hurt “was a miracle,” Spielman said, comparing the pilot of the helicopter to Capt. Sully Sullenberger, who famously steered a passenger plane onto the Hudson River, avoiding New York City in 2009.

“It’s not even a huge yard at the church, not something you would see from above,” said Spielman, a former Washington, D.C. emergency room nurse. “And somehow, this guy was able to lower his [helicopter].”

This is a developing story and will be updated.