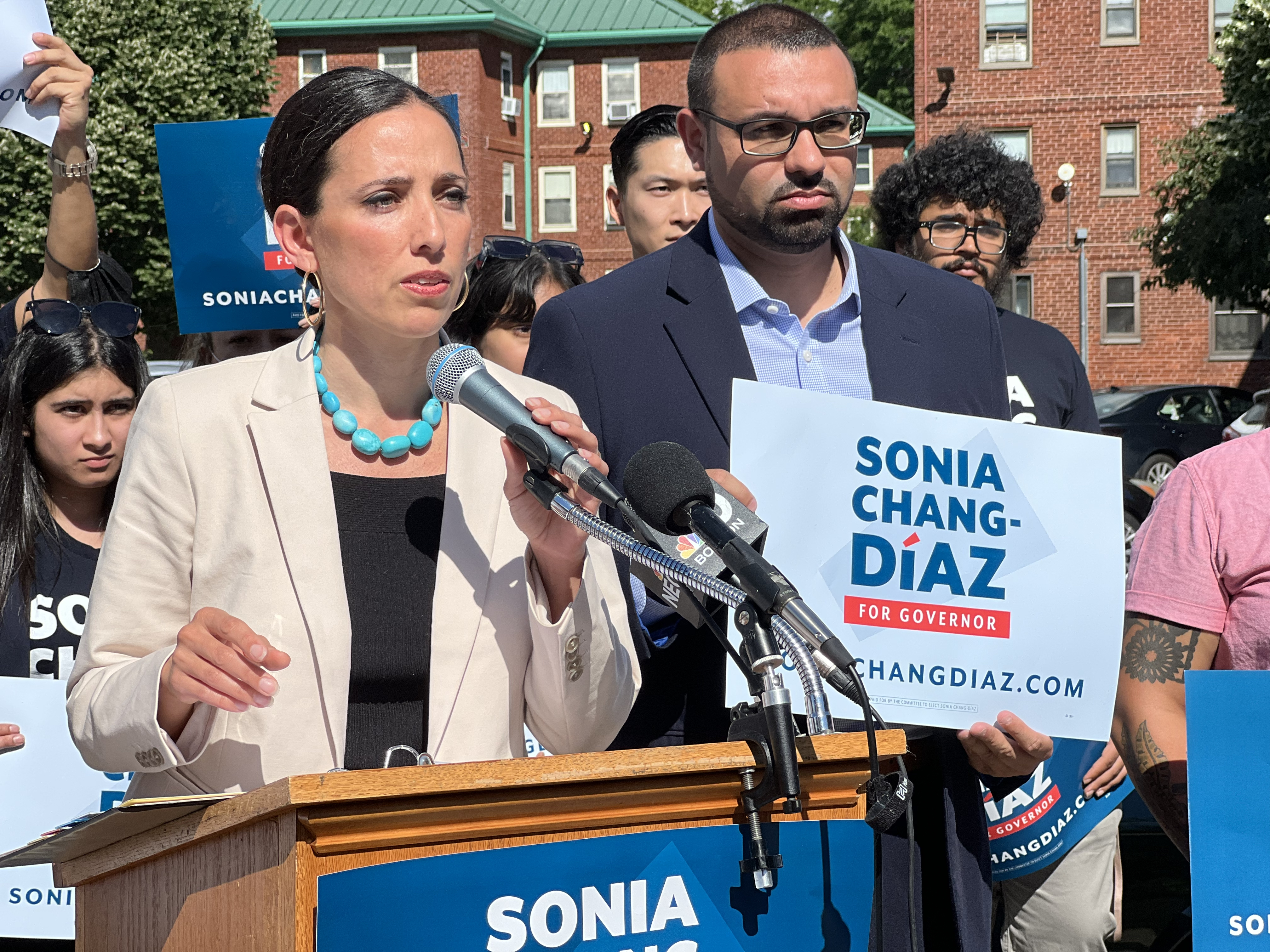 Chang-Díaz had trailed Healey by every measure — fundraising, public polling and endorsements — since the two-term attorney general entered the race in January and went on to win the party’s endorsement by a resounding 71 percent at the state Democratic convention earlier this month. A UMass Amherst poll released hours after Chang-Díaz ended her bid showed the state senator lagging behind Healey by 33 points.

The veteran state lawmaker, who would have been the state’s first Latina and first Asian American governor, acknowledged on Thursday that she did not have a viable path to the corner office.

“I have never shied away from being honest, even when it is hard. And that is why I’m being honest with my supporters today,” Chang-Díaz told reporters in Boston’s Jamaica Plain neighborhood, flanked by a small group of supporters, including her astronaut father.

“I have looked at the numbers every way — every which way,” she said. “And unfortunately there is no path that I can responsibly, in good faith, lead my supporters on that results in me becoming governor this year.”

Chang-Díaz’s name will remain on the ballot, since the deadline to remove it has passed.

But instead of actively campaigning for governor, Chang-Díaz said she would instead be turning her efforts toward supporting a slate of “Courage Democrats” — a group of state legislative and county district attorney hopefuls locked in contested races — who align with her progressive policy values and who joined her for her Thursday morning announcement.

Healey, in a statement, said she was “deeply grateful” to Chang-Díaz for her “years of service to Massachusetts and her inspired leadership” during this campaign.

“I look forward to continuing to partner with Senator Chang-Díaz to bring people together and make Massachusetts work for all of our families,” Healey said.

Chang-Díaz did not immediately endorse Healey, though she said “there’s not a question about” whether she’ll ultimately support the Democratic nominee. She and her supporters will have no other choice come November if they want Democrats to retake the corner office from the Republicans who have held the top two jobs in this deep-blue state for most of the past 30 years.

“This is a huge advantage for Maura Healey,” Boston-based Democratic consultant Mary Anne Marsh, who isn’t working for either candidate, said in an interview.

“While Republicans still have a primary that is unlikely to end before September, for Healey this is reminiscent of what Joe Biden was able to do with the South Carolina primary,” Marsh said. “Healey now has the opportunity to show people what kind of governor she’s going to be and build a true mandate.”

Healey will face either Donald Trump-endorsed former state Rep. Geoff Diehl or businessman Chris Doughty in November. Diehl won the state Republican Party’s endorsement for governor in May by the same margin as Healey won hers. But both candidates trail Healey by double digits in public polling of hypothetical general-election matchups. And Diehl lost his last statewide race, a challenge to Sen. Elizabeth Warren (D-Mass.), in 2018.

Both candidates were already positioning themselves against Healey, and Chang-Díaz’s exit has only reinforced that dynamic. Diehl, who holds a sizable lead over Doughty in public polling of the Republican primary, painted the governor’s race as “a clear contest” between him and Healey. Doughty, in his own statement, argued that he was the one with the “best chance of defeating” the attorney general come November.

There had been questions among the Massachusetts’ political class for some time as to whether Chang-Díaz — the clear underdog in the race who had just $321,184 in her campaign coffers at the end of May, compared with Healey’s $5.2 million — would make it to September. But her decision still caught many by surprise, including some of the supporters she broke the news to in a webinar early Thursday morning.

Chang-Díaz’s early exit shines light on the difficulties women and women of color still face in breaking the highest barriers in this liberal bastion. While voters made Deval Patrick the state’s first Black governor, no woman or woman of color has ever been elected to the top job. Healey, if she wins, would be the state and the nation’s first openly gay governor.

It’s also the product of an election cycle in which Massachusetts Democrats — weary of Republican executive rule and facing their best prospects for retaking the governor’s office in a decade with GOP Gov. Charlie Baker declining to seek a third term — are looking less for liberal policy debates and more for a proven winner who can deliver the corner office.

Still, the end of Chang-Díaz’s gubernatorial campaign is a blow to progressive activists who viewed the Boston-based state senator as their champion, and for those who wanted to see Healey battle-tested in a primary.

“I’m really sad that the state of Massachusetts is losing the opportunity to really make a decision between two really talented women who have ideas about the direction in which this state should go,” Boston City Councilor Ricardo Arroyo, a Chang-Díaz supporter, said in an interview.

But it also serves as a rallying cry for her supporters to mold Healey, who has run an economy-focused campaign that’s been light on policy proposals beyond plans to tackle climate change and expand tax credits for children and certain other dependents, more in their image.

And with a growing air of inevitability around Healey’s ascension to the governor’s office, Democratic activists are now starting to look ahead to January. Jonathan Cohn, policy director for Progressive Massachusetts, which had endorsed Chang-Díaz, said now is the time for activists and progressive groups to begin having conversations about early priorities for a progressive Democratic governor and a Democratic supermajority Legislature that skews more moderate.

“It’s not clear what are the first things a governor Healey wants to do, or wants the Legislature to do,” Cohn said. “There need to be discussions among groups about what can be pushed early on in her term, both when it comes to executive actions and what having a Democratic governor means for shaping what action looks like in the Legislature.”