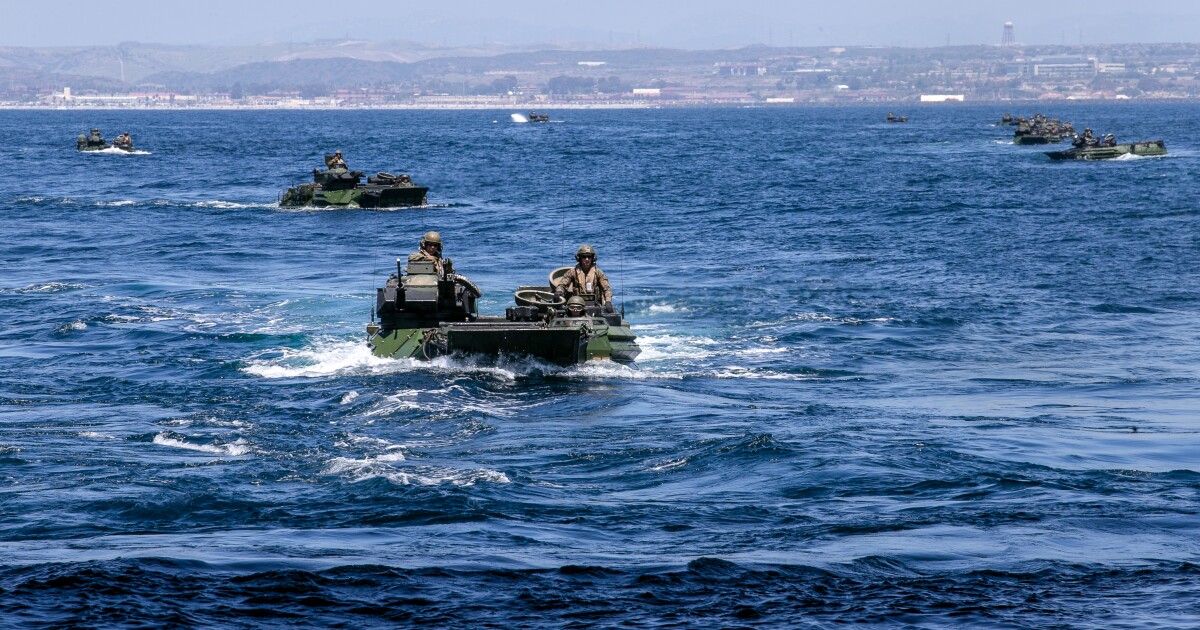 A Marine Corps investigation found that COVID-19 restrictions and overstretched troop commitments — including deployments to the Mexico border — played a role in the training and maintenance lapses that led to the sinking of an Assault Amphibious Vehicle off the coast of San Diego last year, killing eight Marines and a sailor.

The investigation, which examined the formation of the 15th Marine Expeditionary Unit, was released alongside the Navy’s own report into its role in the incident.

The Marines and sailor from Camp Pendleton-based 1st Battalion, 4th Marines — who ranged in ages from 18 to 23 — were killed when the AAV sank while ferrying them from San Clemente Island to the amphibious transport dock ship Somerset. Another Marine Corps investigation into the incident, released earlier this year, found that the poorly-maintained vehicle began taking on water, broke down and that the vehicle commander waited too long to give the order to evacuate. Seven Marines on the craft survived.

The Marines on board had also not received water evacuation training, that earlier investigation found.

Under pressure from the families of those killed, the Marines launched the second investigation. Whereas the first looked at the accident itself, the second examined everything that led up to that AAV and those Marines being in the water that day. Specifically, the service investigated the formation of the 15th MEU.

No concerns raised on vehicles

In the case of the 15th MEU, the platoon element was comprised of the 1st Battalion, 4th Marines. Its battalion landing team — the Marines assigned to ride in the AAVs — was drawn from 1/4’s Bravo Company.

The Marines found that, upon its formation in April 2020, the 15th MEU “did not receive forces that were optimally trained and equipped,” according to the investigation.

Lt. Gen. Carl Mundy III, who headed the investigation, placed much of the responsibility for training and maintenance on the commander of the 3rd Amphibian Assault Battalion — the unit responsible for providing AAVs and their crews to the MEU.

The investigation found that over the four months ahead of the MEU’s formation, the battalion commander reported a vehicle readiness rate of 84 percent — 13 percent higher than the Marine Corps’ average rate. But inspections of the battalion in 2017 and 2019 found a “net degradation” in the material readiness and insufficient oversight by its maintenance management officer.

In one key finding, the report said that 11 of the 14 AAVs provided by the 3rd Amphibian Assault Battalion to the MEU ahead of its planned deployment were non-operational at various points between April 20 and July 20.

In a conference call with reporters Monday, Marine Maj. Gen. Gregg Olson, the assistant deputy commandant of the Marines, said that maintenance time ahead of training with the MEU was cut because some Marines had participated in an exercise and had to quarantine for COVID-19 when they returned, giving them only three weeks to work on the vehicles.

“There was a lot going on that masked the condition that this platoon was in,” Olson said. “I don’t believe (maintenance) got priority.”

The investigation reiterates time and again that the COVID-19 pandemic played a role ahead of the MEU’s formation.

Senior officers from I Marine Expeditionary Force and the 1st Marine Division — responsible for supplying the MEU with Marines — as well as other subordinate commands told investigators that the demands on their time and attention of maintaining Marine operations under COVID-related restrictions was second only to their time in combat. I Marine Expeditionary Force consists of about 50,000 Marines on the West Coast.

“Ultimately, I think it would be a mistake to discount or overlook the extraordinary COVID-related demands on leaders, staff and their Marines and sailors during this period,” wrote Mundy in his findings.

Mundy points to a “task-saturated environment” affecting I Marine Expeditionary Force. Key officers in the chain of command were deployed on a major Middle East exercise, while other Camp Pendleton Marines were tasked with extra duties domestically. Those included augmenting Customs and Border Protection at the U.S.-Mexico border, where Marines were deployed by President Donald Trump, and providing a platoon to the Navy hospital ship Mercy, which was responding to the pandemic in Los Angeles.

The commanding officer of the battalion failed to conduct a combat readiness evaluation of the amphibious assault platoon, and the commanding general of the 1st Marine Division should have made sure he did so. But neither happened, the investigation found.

Even if the evaluation had been carried out, the investigation said, it might not have been effective in preventing the accident because it would have been conducted at Marine Corps Air Ground Combat Center in Twentynine Palms — in the middle of the Mojave Desert, far from the Pacific Ocean.

The investigation noted other failures among the 1st Marine Division’s chain of command.

Those evacuation drills could have saved lives — and had done just that one year earlier, according to the investigation. In July 2019, an AAV training with the 26th MEU on the East Coast sank while transiting from ship to shore. Unlike last year’s sinking, all the Marines on board that craft escaped safely. This, the investigator wrote, was due to the training they received and the vehicle commander’s decision to evacuate as the water level began to rise.

Olson said that 20 Marine Corps AAVs had sunk in the 30 years before the 2020 accident. Most of those, he said, were vehicles that had broken down and were under tow when they sank. Just three of the incidents were fatal, he said: one on the East Coast in the 1990s, one at Camp Pendleton in 2011 and last year’s sinking.

A separate Navy investigation also released Wednesday found that while the Navy did not conduct its amphibious operations by the book on the day the AAV sank, its failures did not contribute to the accident or the loss of life.

The investigation found that the commanding officer of the Somerset, Capt. Dave Kurtz, did not fully understand his command responsibilities in regard to AAV operations. Other members of the Somerset’s crew similarly did not understand their roles when AAVs are in the water and were not notified when the AAVs left San Clemente Island to return to the ship.

Two safety boats were supposed to be in the water with the AAVs. The plan was, at the beginning of the day, to have one boat from the Somerset serve as a safety boat and an empty AAV serve as the second. However, the Somerset’s boat had a problem and the Marines opted to use a second empty AAV as the second safety boat. When AAVs had mechanical problems while operating on San Clemente Island, those two safety boat AAVs stayed behind with them while the others went into the water to return to Somerset.

The findings led to changes in how the Navy operates with AAVs, according to Vice Adm. Roy Kitchener, the San Diego-based commander of the Naval Surface Forces.

Now only Navy boats can serve as safety boats, Kitchener said on the Monday conference call. No longer will AAVs fill that role. Also, now only the commanding officer of the amphibious ship can authorize the AAVs to “splash” into the ocean to return to the vessel. New training integrating Marine Corps procedures is also being added to Navy schools, he said.

“This tragedy should never have occurred,” Kitchener said.

The families of those killed in the AAV filed a lawsuit against BAE Systems, the manufacturer of the vehicles, alleging the company knows its AAVs are defective. The lawsuit claims that even if the Marines were trained properly to escape their vehicle, design flaws would have prevented them from doing so.

The families are not able to file suit against the military due to a longstanding legal precedent known as the “Feres Doctrine,” which protects the services from lawsuits even when deaths are the result of negligence.

The Marines removed three commanders in connection with the incident. Lt. Col. Michael Regner, the commanding officer of Battalion Landing Team 1/4 — the unit to which the troops were attached — was removed from command in October 2020. Col. Christopher Bronzi, the commanding officer of the 15th Marine Expeditionary Unit, was fired in March upon the completion of the first Marine Corps investigation.

Initially, the Marines elected not to punish Maj. Gen. Robert Castellvi, the two-star general in command of the 1st Marine Division when the vehicle sank, even though the first investigation found he bore some responsibility. Castellvi left his command to become the Marine Corps’ inspector general just months after the sinking.

Shortly after the second Marine Corps investigation began, Castellvi was suspended from his job as inspector general pending the new investigation’s outcome. In June, the Marines formally punished him, effectively ending his career.

Kitchener said three Navy officers received adverse administrative action as a result of its investigation — the commander of the amphibious task force, the captain of the Somerset and the ship’s tactical action officer. Kitchener did not specify what those actions were.