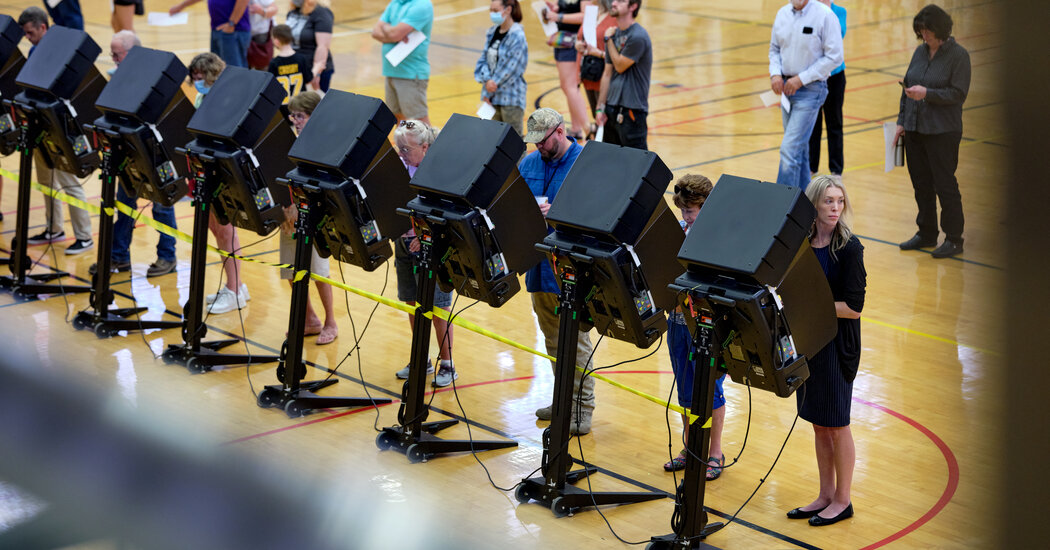 JACKSON, Wyo. — Representative Liz Cheney of Wyoming was resoundingly defeated by Harriet Hageman in her Republican primary on Tuesday, handing Donald J. Trump his most prized trophy yet in his long campaign to purge the Republican Party of his critics.

Ms. Hageman, a lawyer in Cheyenne with little political following before she was lifted by Mr. Trump’s endorsement, trounced Ms. Cheney, the daughter of a former vice president, by more than 30 percentage points, with more than 90 percent of the vote counted.

Ms. Cheney’s loss was as anticipated as it was consequential. The leading Republican voice against Mr. Trump, and vice chairwoman of the committee investigating the Jan. 6 Capitol attack, next year will no longer have her perch in Congress from which to battle a figure she believes poses a grave threat to American democracy.

Ms. Cheney conceded defeat just as The Associated Press called the race, suggesting she was setting a model for accepting the will of voters.

“Harriet Hageman has received the most votes in this primary — she won,” Ms. Cheney told supporters gathered outdoors on a ranch here. Standing alone on the stage, she went on to implore Americans to fight back against Mr. Trump and others who deny his loss in the 2020 presidential election. “No citizen of this republic is a bystander,” she said, adding: “We cannot abandon the truth and remain a free nation.”

The repudiation of Ms. Cheney made clear Republican primary voters’ appetite for retribution against officeholders who openly and aggressively confront Mr. Trump, even as the former president remains embroiled in multiple investigations. Just two of the 10 House Republicans who voted to impeach Mr. Trump last year will advance to the general election this fall.

None of those 10, however, had the stature of Ms. Cheney, who before being ousted from House Republican leadership last year, was viewed as a potential leader in the chamber.

Her loss, two months after George P. Bush’s landslide defeat in a bid for attorney general in Texas, represents the full and perhaps final transition of the G.O.P. from the traditional conservatism of the Bush-Cheney era to the grievance-oriented populism of Mr. Trump.

Other contests held Tuesday would reveal the extent of that transformation. In Alaska, Senator Lisa Murkowski, another daughter of local political royalty and one of seven Republican senators who voted to convict Mr. Trump of incitement of insurrection, is in a re-election fight against a field led by Kelly Tshibaka, a Republican and former state official whom Mr. Trump endorsed.

Alaskans were also deciding whether to embrace a comeback for former Gov. Sarah Palin, the onetime vice-presidential nominee whose slashing attacks on the media presaged Mr. Trump’s rise. Ms. Palin is running both in a special election runoff for a House seat and in a primary for a full term of her own. The state’s system of ranked-choice voting allows the top four finishers in the primaries to move on to the general-election ballot in November. Results in those races were not expected Tuesday night.

Ms. Cheney has vowed to continue her fight against the former president, casting the primary as only one front in a longer political war in which she’s determined to prevail.

Focused almost entirely on the Jan. 6 panel, and reluctant to campaign publicly while facing death threats and venomous criticism, Ms. Cheney was long resigned to her political demise in the state that elevated her father 44 years ago to the seat she now holds. She has set her sights beyond Wyoming, arguing that blocking Mr. Trump’s return to the White House is her most important task, a mission that has fueled speculation that she’s considering a presidential bid.

Ms. Cheney delivered her concession speech in measured tones, speaking as if she was on the Jan. 6 committee rostrum in the Capitol rather than standing in front of bales of hay at a ranch in the shadow of the Teton mountains. She hinted at a potential presidential bid, or at least a grass-roots and bipartisan effort, to block Mr. Trump’s comeback, as she extended a hand to Democrats and independents.

“This is a fight for all of us together,” she said, noting that her dedication to party has its limits. “I love my country more,” she said.

Twice invoking the Civil War, Ms. Cheney offered a possible signal of what may follow after her congressional loss. “Lincoln was defeated in elections for the Senate and House before he won the most important election of all,” she said.

It’s not clear, however, that she would even be competitive in a 2024 G.O.P. primary, a prospect Ms. Cheney seemed to acknowledge this month when she said her “very sick” party might take “several cycles” to change.

Where the congresswoman saw illness, however, Ms. Hageman spotted opportunity.

She featured Mr. Trump in her campaign literature and her television advertising and echoed his false claims that the 2020 presidential election was rigged, and she was rewarded for it in a state that had handed the former president 70 percent of the vote two years ago, his largest percentage in any state.

The strategy completed Ms. Hageman’s evolution from Trump critic to vehicle for his political revenge. In 2016, she called Mr. Trump “racist and xenophobic” and tried to block his path to the G.O.P. presidential nomination. But like many Republicans, Ms. Hageman has since fallen in line and declared Mr. Trump “the greatest president of my lifetime.”

Ms. Cheney, too, has dramatically shifted her views on Mr. Trump, from reliable ally on policy to antagonist in the aftermath of his refusal to accept defeat.

After a number of Wyoming Republicans vied for Mr. Trump’s support, and with some of his supporters nervous that the anti-Cheney vote would fragment, the former president got behind Ms. Hageman nearly a year ago. The daughter of a ranch owner, she has long been active in Republican politics and came in third in the 2018 G.O.P. primary for governor.

As a trial lawyer, Hageman has been a fierce advocate on issues important to the state’s powerful ranching, mining and energy interests, fighting environmentalists in court over land use and federal regulations. She and Ms. Cheney were once political allies. Ms. Hageman served as an adviser to Ms. Cheney’s short-lived 2014 Senate campaign and endorsed when she claimed the House seat in 2016.

The women debated just once, in June, and Ms. Cheney used the forum to urge Wyomingites to “vote for somebody else” if they wanted a politician who would violate the oath of office.

In the closing weeks of the primary, Ms. Cheney aired an ad featuring her 81-year-old father calling Mr. Trump “a coward,” making it even clearer that she was using the primary as a stage for her crusade against Mr. Trump rather than trying to fend off Ms. Hageman. Just as notable, Ms. Cheney held back millions from her campaign fund, over $7.4 million as of last month.

Her approach was starkly different from those of other Republicans who tangled with Mr. Trump in the aftermath of his defeat in 2020 only to subsequently mute their criticism. That roster included figures like Gov. Brian Kemp of Georgia and Representatives David Valadao of California and Daniel Newhouse of Washington, the two House Republicans who voted to impeach Mr. Trump but managed to reach the general election.

Ms. Cheney, however, was defiant, insisting that Mr. Trump must be confronted and condemned. Her language resonated with the dwindling ranks of anti-Trump Republicans and with even more independents and Democrats, whom she sought to nudge into voting in the G.O.P. primary in the final months of the race.

It was far from enough to change the outcome of the race, but such crossover voters were easy to find in upscale Teton County, home to Ms. Cheney and her parents. The county, which includes Jackson and the surrounding resort communities, is the most liberal in the state, a blue dot in the corner of the reddest of states.

With Ms. Cheney openly appealing for votes from Democrats and independents, many here responded to that call — even if they couldn’t quite believe they were momentarily registering as Republicans to back a Cheney.

Showing up at the town hall in Jackson to cast a ballot on Monday, the last day of early voting, Maggie Shipley, who works for a local nonprofit organization, said she was switching her registration to Republican to participate in the primary and vote for Ms. Cheney.

“The election lies are terrifying to me, and preserving democracy is really important, and at least she has that going,” Ms. Shipley said.