After the death of 22-year-old Mahsa Amini in police custody in Iran, the outrage should be leading the Biden administration to throw out its Iran policy and start over.

Protests have roiled over 40 cities across Iran since Sept. 16. This is different from 2019, when rising food prices led to riots in Iran. Now, Iranians are protesting the repression and restrictions of theocratic rule. Amini’s death in police custody was bad enough, but Iran’s response has been atrocious. The brutal crackdown has led Iran’s police to kill dozens of protestors. On top of that, Iran launched drone and artillery reprisal strikes across the border into Kurdish areas in Iraq, charging they were supporting protests in Iran.

As protests enter their twelfth day, Team Biden is hunkering down. Yes, there were token gestures with new sanctions and steps to improve internet access for Iranians, but you can tell top administration officials are trying to ride this one out. 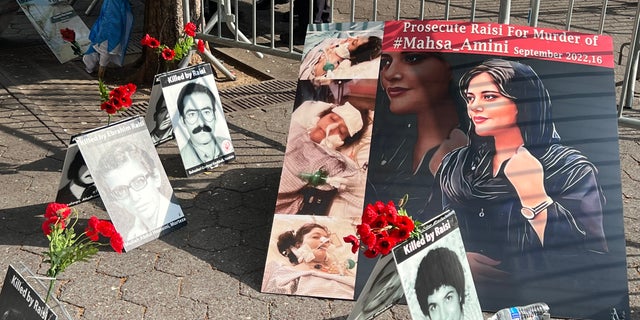 A display of 2000 victims of the Iranian regime includes a poster of Mahsa Amini, 22, who died Friday after security forces allegedly murdered her for violating hijab (headscarf) laws.
(Fox News Digital)

At first, there were small gestures. President Joe Biden managed to squeeze in a sentence at his U.N. speech Sep. 21, announcing “we stand with the brave citizens and the brave women of Iran who right now are demonstrating to secure their basic rights.” Treasury Secretary Janet Yellen turned up the heat when she sanctioned several Iranian leaders Sep. 22. “Mahsa Amini was a courageous woman whose death in Morality Police custody was yet another act of brutality by the Iranian regime’s security forces against its own people,” Yellen said. “We condemn this unconscionable act in the strongest terms.”

That sounded encouraging. But it didn’t last. On Sunday, National Security Adviser Jake Sullivan said he was still “determined to succeed” in returning Iran to the nuclear deal. He insisted to CBS’s Margaret Brennan on “Face the Nation” that the White House could carry on nuclear deal diplomacy while “pushing back and speaking out on Iran’s brutal repression of its citizens and its women.” In Sullivan’s words: “We can and will do both.”

Iran’s citizens are risking death and arrest to protest in the streets. Against that backdrop, Biden’s pursuit of a return to the Iran nuclear deal looks pitiful. Iran has toyed with Team Biden for the better part of two years. Don’t forget Iran is massively out of compliance with the 2015 nuclear deal. They are enriching uranium to 60% instead of the allowed 3.67%, storing too much uranium, operating banned centrifuges, and refusing to comply with UN inspections. And get this: there’s a deal on the table, but Iran won’t sign.

Rehabilitating Iran is an Obama-era dream, and it just won’t die. For almost 15 years, key players like Sullivan and Secretary of State Antony Blinken have been invested in a vision for Iran first laid out in the 2008 campaign, when then-Senator Barack Obama asserted Iran “should be a regional power” and told The New York Times he sympathized with Iran’s “narrative” about U.S. support for the shah and for Iraq over the decades.

During that time, Iran has spread chaos and terrorism across the region. Iran still wants a nuclear weapon so they can threaten to fry Israel, the U.S., or anybody else that bugs them. They’d like ballistic missiles, too, hence all the test “satellite launches.” Pursuing a nuclear weapon is a tactic for regime survival. The raw fact is that Iran does not need to enrich uranium, ever; fuel for civilian nuclear power plants can be purchased in the world market, which is how nuclear fuel is obtained for most countries.

Behind all this mess is China, of course, keeping the mullahs in power with increased oil purchases. This past spring, Iran’s oil exports went up 30% compared to 2021 as China bought more from Iran, the Wall Street Journal reported Apr. 22.

Now is the moment for Team Biden to get real on Iran. But that’s not their style. They lean toward what Biden at the UN termed “relentless diplomacy” and they will probably just snuggle into their climate crisis comfort zone.

Rebecca Grant joined FOX News Media as a contributor in March 2022, providing analysis on Russia’s invasion of Ukraine and other national security and military topics.