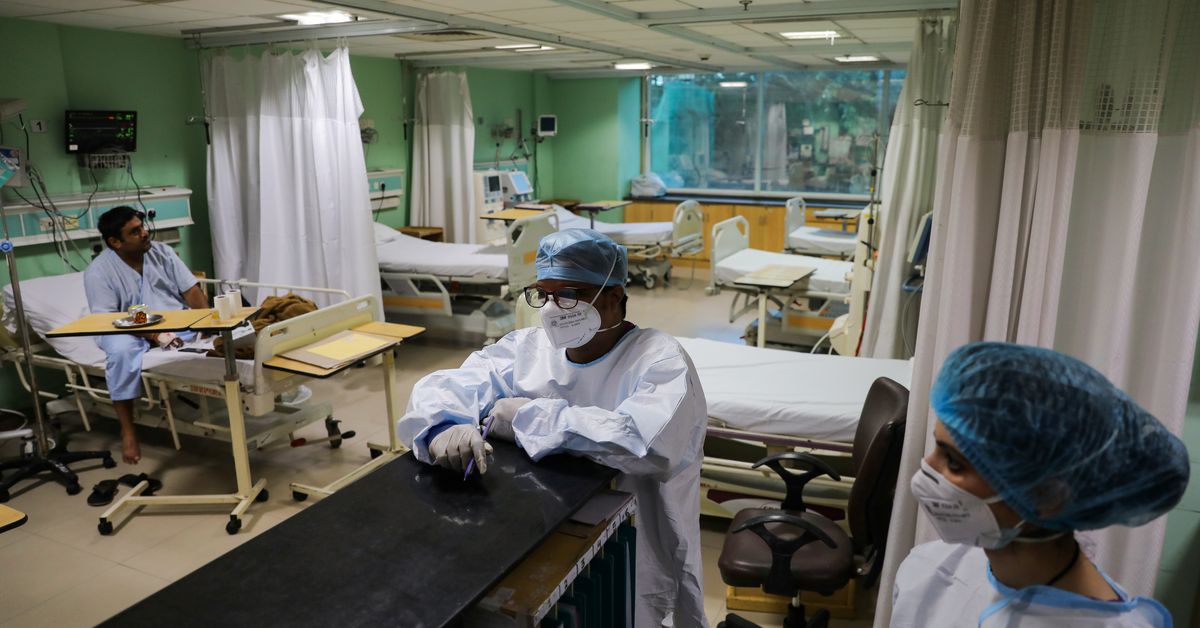 NEW DELHI, Sept 7 (Reuters) – As COVID-19 cases and deaths exploded in India in April and May, New Delhi’s premier Sir Ganga Ram Hospital and several others ran so short of oxygen that many patients in the capital suffocated.

When Reuters visited the hospital on Friday, its last coronavirus patient was readying to leave after recovery – a remarkable turnaround health experts attribute to growing levels of immunity from natural infection and vaccinations.

But hospitals have learned from bitter experience during the second COVID wave, when funeral pyres burned non-stop and bodies littered the banks of the holy Ganges river, as India braces for another possible surge in infections around its September-November festival season.

Beds have been added at facilities around the country, and hospitals are working to ensure ample supplies of oxygen.

Ganga Ram is raising its oxygen storage capacity by 50%, has laid a one-kilometre-long pipeline carrying the gas directly to COVID ICUs, and is installing equipment to keep the oxygen flow high.

It has also ordered an onsite oxygen-generation plant, which are mostly made in Europe and can take months to arrive given the surge in demand globally.

“In light of the possibility of the emergence of coronavirus mutants, with higher transmissibility and immune escape, the hospital continues to prepare for the worst,” said Satendra Katoch, medical director of the hospital, in between guiding colleagues doing an internal audit of its facilities.

The crowded private hospital, however, said it had no scope to add more beds. During the peak of India’s second wave, Ganga Ram expanded its capacity by nearly 50% to about 600 beds, but even so, some 500 patients per day had to be put on a waitlist for admission, according to physician Varun Prakash, who managed its war-room during the crisis.

Nationally, India has added many more hospital beds in the past few months and imported more than 100 oxygen carriers to raise the total to about 1,250. Companies such as Linde (LIND.NS)(LIN.N) are planning to lift the country’s overall output of the gas by 50% to 15,000 tonnes a day.

Linde told Reuters it had retained 60 of some 80 cryogenic containers – meant to hold super-cooled oxygen – it had brought in from the company’s overseas operations, in case demand shot up again.

The federal government, meanwhile, has approved the construction of nearly 1,600 oxygen-generation plants at hospitals, though fewer than 300 had been set up as of early last month as imports take time.

Almost all states are readying special paediatric wards as some experts warn unvaccinated children could be vulnerable to any new virus mutations. States including Madhya Pradesh are also stocking up on anti-viral drugs such as Remdesivir.

But with a government survey estimating as many as two-thirds of Indians already have COVID-fighting antibodies through natural infection, and 57% of its adults with at least an initial vaccine dose, many health experts believe any new outbreak of infections could be much less devastating than the second wave.

“The number of susceptible persons will be less now, as many persons have been infected or vaccinated,” said epidemiologist and cardiologist K. Srinath Reddy, president of the Public Health Foundation of India.

“Even if reinfections or breakthrough infections occur, they are likely to be mild and mostly managed at home. The serious gaps in health-service delivery that were evident in the second wave are less likely to be seen.”

Kerala is seeing such signs already. The southern state currently has the highest number of infections, including many among vaccinated or partly vaccinated residents, but its fatality rate is well below the national figure.

The health ministry, which wants to immunise India’s entire adult population this year, did not respond to a request for comment on its preparations for a potential third wave.

“With the emerging evidence that for individuals with past infection, single dose may provide far greater levels of antibodies than people who did not have infection or receive both shots of vaccines, it is assuring for India.”