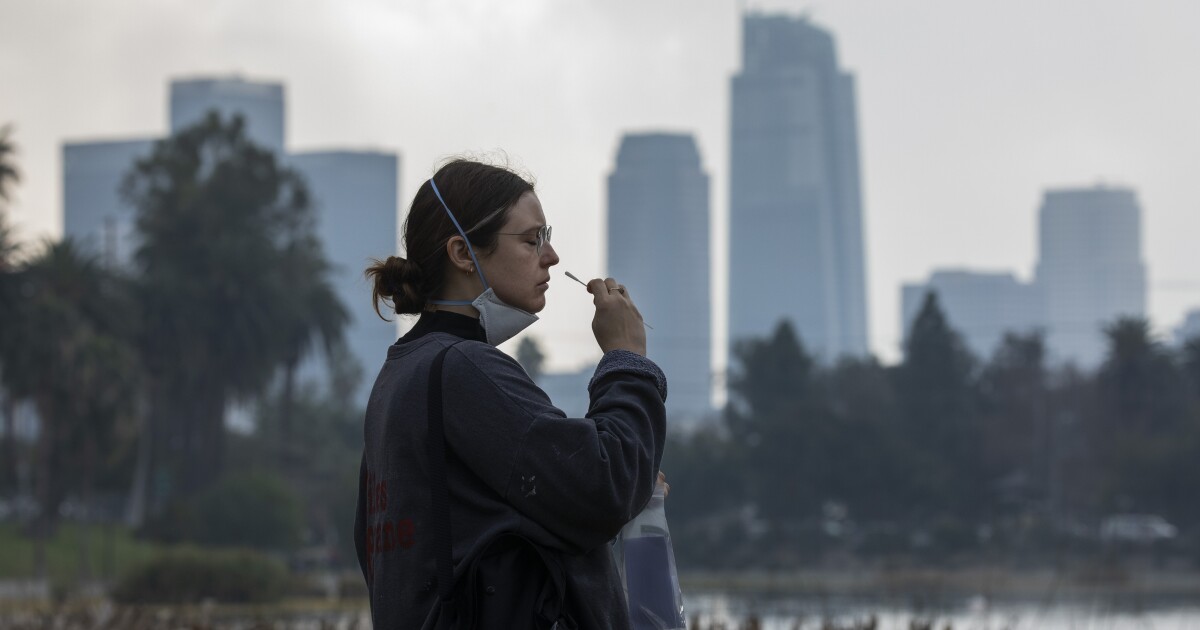 While California continues to see disturbing rises in COVID-19 hospitalizations and deaths, there are some early signs the unprecedented Omicron wave is slowing.

The shift is uneven across the state, but the numbers suggest California could be reaching a crest in the latest surge. States on the East Coast that were hit earlier by the Omicron wave have already started to see a sustained decline in infections.

Here are what the numbers show:

The exponential growth in California’s case rate appears to be leveling off, although it probably will take a few days — following any reporting backlog from the Martin Luther King Jr. holiday weekend — to be sure.

According to data released Tuesday that reflect numbers through Monday, California was averaging 104,000 cases a day for the most recent seven-day period, slightly above the prior week’s rate of 101,000; the week before, the state was reporting 55,000 cases a day. California’s case rate reached a high of more than 115,000 cases a day in the middle of last week, and fluctuated between 114,000 and 115,000 for a few days.

Some of the state’s most populous regions may be starting to see a leveling in case rates. Southern California recorded 69,000 new cases a day over the most recent seven-day period, about flat compared with the 71,000 from a week earlier. The week before, the region tallied 39,000 cases a day.

Los Angeles County posted a record number of coronavirus cases last week, nearly 42,000 a day. But based on numbers released since then, the county is now averaging about 38,000 cases a day.

Officials said that numbers released Tuesday may be lower than expected due to lags in reporting over the holiday weekend. A clearer picture may emerge later this week.

The Bay Area is now averaging about 19,000 coronavirus cases a day, a rate that has fluctuated between 18,000 and 22,000 for roughly the last week. The Greater Sacramento area recorded about 5,500 cases a day for the most recent weekly period. The capital region has been fluctuating between 5,000 and 6,000 cases recently.

In Santa Clara County, coronavirus levels in wastewater started declining about 1 1/2 weeks ago. Officials expect the dip will presage a sustained decline in coronavirus cases.

In the Greater San Joaquin Valley, a region that has generally lagged behind trends in Southern California and the Bay Area, cases are still going up. The area tallied 9,300 cases a day over the last week, higher than the 6,500 cases a day for the prior week; the week before that, the region recorded 2,900 cases a day.

In rural Northern California, about 750 cases a day were reported in the last week, up from about 680 the week before, and more than double the roughly 300 cases a day the sparsely populated region reported two weeks ago.

There are also signs that coronavirus-positive hospitalizations, though not yet declining, are growing at a slower rate than seen earlier in the surge.

As of Tuesday, 15,179 such patients were hospitalized statewide, state data show.

However, the growth from Jan. 11 to Tuesday was far more modest: about 23%.

Even so, the latest count is the highest since Jan. 29, 2021 — and represents a significant strain on the state’s healthcare system.

The University of Washington’s Institute for Health Metrics and Evaluation model projects that the daily number of Californians infected is peaking last week. The model suggests that by mid-February, new infections could be 15% of this week’s levels, about the same as mid-December.

Even once the infection trend reverses, it will still take weeks for the full fury of the Omicron wave to dissipate. Throughout the pandemic, officials have noted that a rise in cases will invariably trigger corresponding increases in COVID-19 hospitalizations and deaths a few weeks later. The institute, for instance, estimates the number of hospitalized coronavirus-positive patients will peak at the end of January.