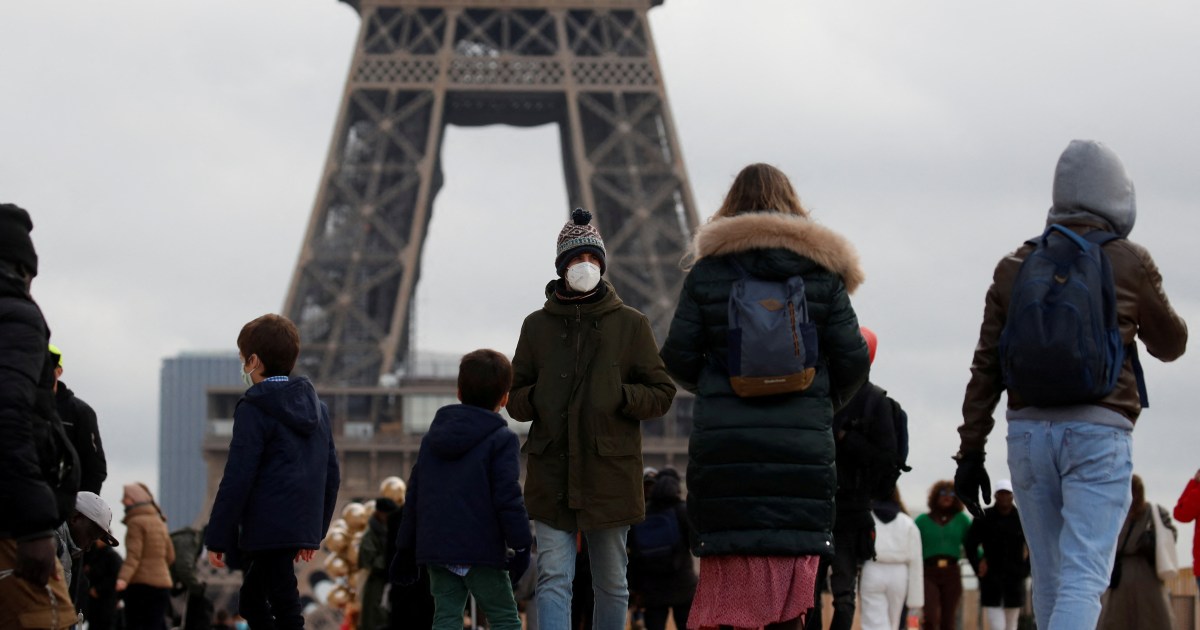 France has announced new COVID-19 measures in a bid to stem a surge in infections as concern rises worldwide over the rapid spread of the highly transmissible Omicron variant.

From January 3, working from home will be mandatory for at least three days per week for those who can do so, while public gatherings will be limited to 2,000 people indoors, and to 5,000 people for outdoor events, French Prime Minister Jean Castex said late on Monday.

The new rules will be in place for at least three weeks, Castex said, but there will be no curfew for New Year’s Eve and schools will reopen as planned in early January.

The moves came after France on Saturday recorded more than 100,000 COVID-19 infections in a single day for the first time since the pandemic erupted.

More than one in 100 people in the Paris region have tested positive in the past week, according to the capital’s regional health service. Most new infections were linked to Omicron, which government experts predict will become the dominant strain in France in the coming days.

Castex stressed that hospitals’ intensive care units were not currently overburdened because more than 90 percent of France’s adults had been fully vaccinated, although he warned that the country was now in a “race against the clock” to speed up booster inoculations seen as critical to curtailing the spread of the new variant.

“I know that it feels like a film without ending, but a year ago we started our vaccination campaign and now we are one of the best vaccinated and best-protected people in the world,” he told a news conference following a cabinet meeting.

Elsewhere in Europe, several other countries have also opted to roll out new measures in response to the spread of Omicron, which studies suggest is significantly more infectious but milder than previous versions of the coronavirus.

The Netherlands has already shut down all non-essential stores, restaurants and bars and extended the school holidays in what largely amounts to a new lockdown.

In Belgium, new measures went into effect on Monday and over the weekend, with shopping in large groups banned, and movie theatres and concert halls closed in the middle of the festive season.

Starting January 3, high-protection or double masks will be mandatory at supermarkets and on public transport; entertainment venues will close at midnight, and capacity will be cut to 10 percent at football stadiums, among other measures.

However, other parts of Europe have opted against imposing fresh restrictions.

In Poland, a nation of 38 million where the daily death toll now often tops 500, currently closed nightclubs will be allowed to reopen on New Year’s Eve, with the government unwilling to go against the will of the many voters opposed to virus curbs and mandatory vaccinations.

The United Kingdom’s government has meanwhile ruled out any new measures in England this year despite recorded infections repeatedly passing the 100,000 mark in recent days.

And despite the highest death toll from COVID-19 in Europe, Russia will ring in 2022 with little if any restrictions. Many precautions will be lifted during the holiday period that runs for 10 days starting from New Year’s Eve onwards.

Omicron has also raced through many other parts of the world in recent days, threatening to overwhelm hospitals, stifle travel plans and hobble economies already heavily affected by the pandemic.

President Joe Biden on Monday warned that hospitals in the United States could soon be “overrun” as the world’s worst-hit country grapples with a soaring COVID-19 caseload fuelled by the new variant. More than 200,000 daily infections were confirmed in the last two days nationwide.

Elsewhere, authorities in the Chinese city of Xi’an tightened restrictions on Monday to try and stamp out a worsening coronavirus outbreak there.

And in Australia, authorities recorded another record surge in cases on Tuesday amid an outbreak of Omicron, while state leaders quarrelled over domestic border controls.

Concerns have also been heightened in the Gaza Strip, where Palestinian officials said on Sunday they had identified the first case of Omicron in the besieged enclave.

Meanwhile, confirmed infections in Argentina almost doubled on Monday from Friday to 20,263, the highest daily tally in almost six months.