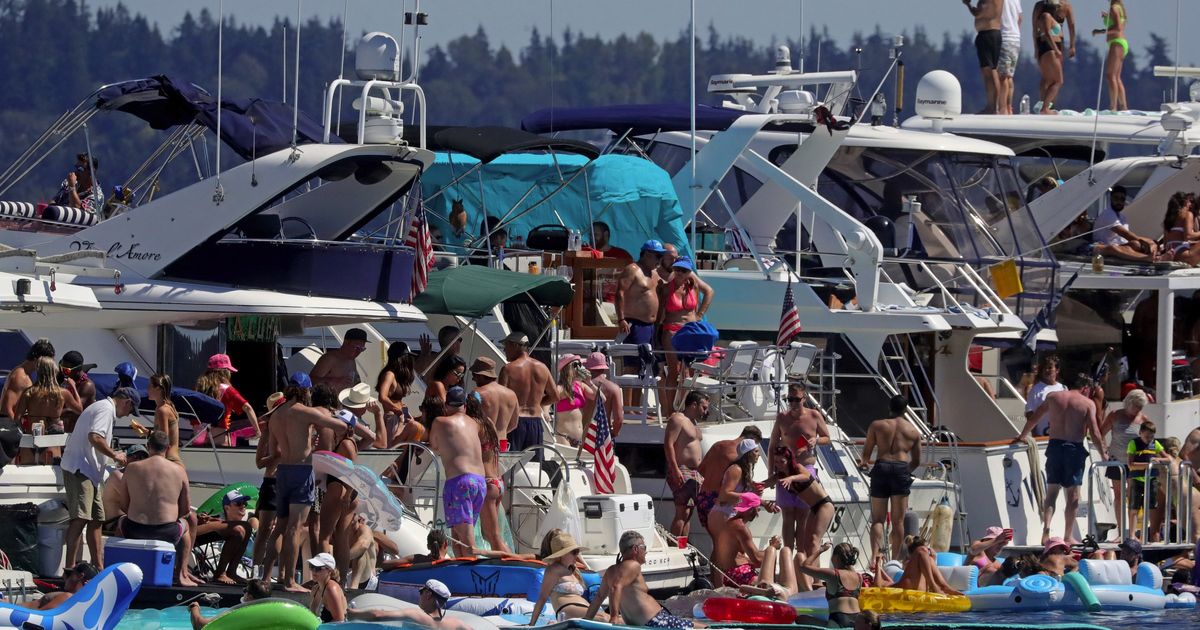 Kyle Johnson laid out a blue tarp along Lake Washington’s edge with his 10-year-old son, Hayes, claiming their own little spot to watch the hydroplanes race across the big blue lake.

This kind of prime real estate — where they can dangle their toes in the water or jump in for a quick cool-off — was pretty easy to come by Saturday morning during the Seafair Festival Weekend, Johnson said. On Sunday, it will be a different story.

The two, from Pierce County, along with the rest of their family, plan to be outside those metal gates Sunday at 5 a.m. Once they open, Johnson said, he’s seen whole families sprint to grab their patch of grass, knowing the crowd to come. Even if that means losing sleep, Johnson’s prepared to do what it takes.

“It’s just in our blood — Seafair Sunday,” he said.

For the first time since the pandemic began, Seattle’s Seafair Weekend Festival has fully returned to its regular calendar of events. The Blue Angels are back in the sky. High-speed hydroplane boats, zooming so fast they look like they’re barely touching the water, are here for three full days of racing. And based on the hordes of people that made their way inside the festival gates at Genesee Park through the day Saturday, it appears many folks are eager to shake the shutdown and get back to this decades-long tradition.

Today, Seafair has events that stretch through the summer, including a fireworks show to celebrate the Fourth of July. Originally, the festivities centered around water events with hydroplane racing as the main attraction. More have come — from the air — including the Navy’s Blue Angels as well as the Army’s Golden Knights parachutists.

But Seafair’s past is also layered in community. For example, Umoja Fest, which honors Seattle’s Black community’s heritage and history, is also happening this weekend at Judkins Park. That celebration predates Seafair by about 10 years. It also helped to inspire it, according to Umoja Fest’s website.

Brian Anderson, now a vendor at Seafair, has been coming to the festival since the 1960s. Next to a long display of vintage hydroracing pins, Anderson was selling his handmade and hand-painted model hydroplanes.

He had some round-nosed models that look just like the boats racing in the ‘50s when Seafair began. Others looked just like the speeding vessels he can hear roaring from his stand.

As a kid, Anderson and his friends would make hydroplane models and shove them across the grass and see how far they went. As he got older, he kept making models even when his friends stopped. And in 1976, he made his first sale at Seafair. He’s been selling his model work ever since and setting up in the same shaded spot along Lake Washington.

“For kids in the ‘60s, Seafair was as big as the Seahawks,” Anderson said.

In fact, it started in 1950 in part because Seattle didn’t have any major league sports teams (the Seattle SuperSonics entered the NBA in 1967), and Seattle was looking for a way to attract tourists and boast Seattle “as the ‘boating capital of the world,’” according to Seafair’s website.

Johnson remembers when three Seattle TV stations broadcast the races live. And although selling a model boat is nice, he said, his favorite part is just talking with people about Seafair’s history and sharing stories from the past.

Some traditions have changed. The races are no longer a staple of local TV broadcasts. And while Johnson remembers getting in for free as a teenager, a day pass for an adult today costs $40 (Many, of course, avoid that cost by watching along other stretches of Lake Washington or at Seward Park).

Keith Moon and his son Carter, 8, don’t have a long history with the festival. They live in the Tri-Cities and started driving at 5 a.m. Saturday so Carter could see the Blue Angels fly in the afternoon. Carter wore a blue shirt on accident.

“I like how they’re loud and stuntful,” Carter said. “They do barrel rolls and vertical pitches.” He’s gotten more into them since getting a virtual reality headset that lets him feel like he’s one of the Blue Angel pilots doing rolls and tricks. And he knows, at least somewhat firsthand, that those tricks in entertaining thousands of people Saturday afternoon are way tougher than they look.

Even though the festival looks a little different from Johnson remembers it as a kid, he’s happy it’s back.

“Not having it the last couple of years, we missed it,” he said. He started coming to the festival with his dad when he was a kid and his son, Hayes, starts asking about it in the winter time.

Maybe the best way to explain why he loves Seafair, Johnson said, is that it’s always been a special time for his family. Something they could count on for the summer, a tradition that he and his dad, and now his kids, would do together.

“Here it is, dad!” Hayes shouts as two H1 hydroplane racers line up to compete.

Water shoots from the boats’ tails as they take off down the stretch, flying around turns.

Johnson jumps up out of his chair. “Oh yeah, we’re racing baby!” he cheered.