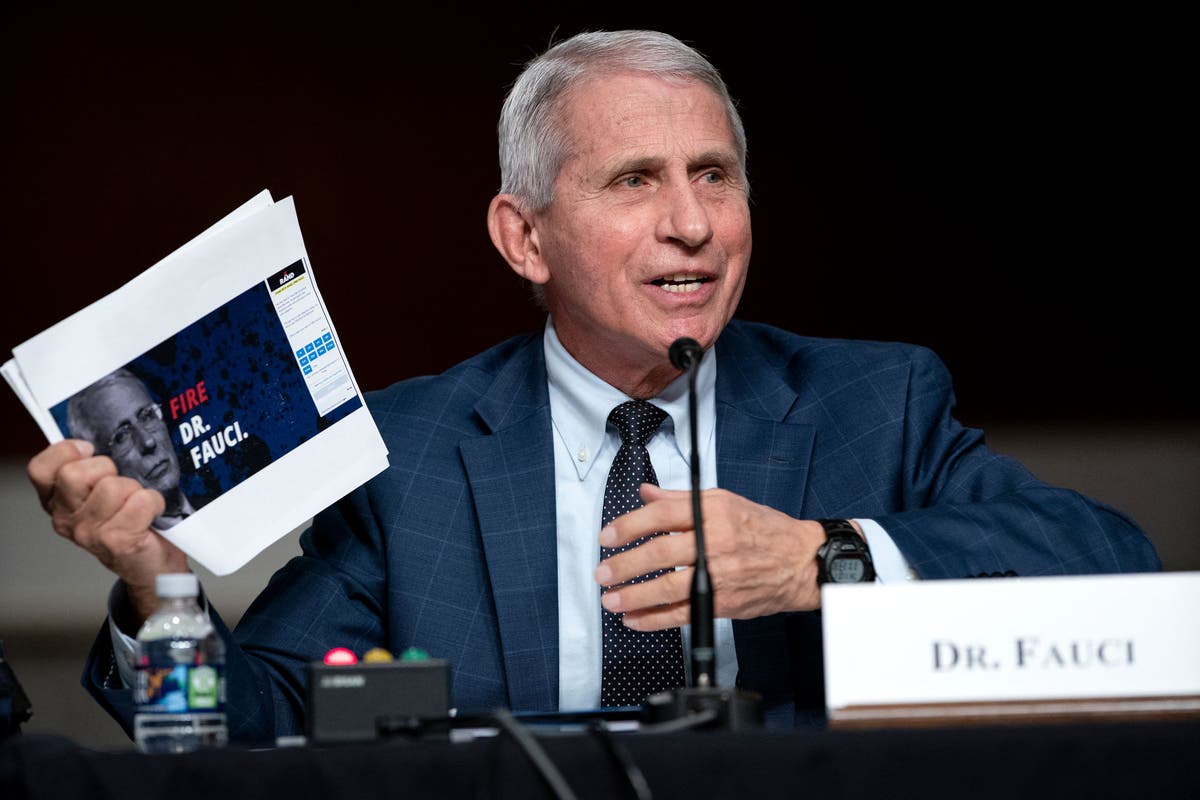 The hearing comes as health policymakers say they believe the administration needs an urgent reset in the way it is approaching the new realities of the pandemic, although Dr Fauci has suggested that the US was on the “threshold” of Covid-19 becoming an endemic.

Dr Fauci is the target of a video released on Monday evening by Project Veritas claiming that he was involved in research projects related to coronaviruses by the Wuhan Institute of Virology that were deemed too risky by the Department of Defense, emails cited by the group claim.

Paul calls Fauci ‘juvenile’ for linking him to death threats

Senator Rand Paul has been blasted as “unbalanced” and “delusional” after he doubled down with new attack on Dr Anthony Fauci following a senate committee hearing.

What did Dr Fauci say about variant specific booster?

The National Institute of Allergy and Infectious Diseases director said during a senate committee hearing on Tuesday that there was an “urgent need” for a so-called super vaccine because of “the inevitable continual emergence of new variants”.

He added that NIAID was making significant progress on the issue, which would allow the US and countries globally to deliver “a pan-coronavirus vaccine, namely one that would be effective against all SARS-COVID-2 variants, and ultimately against all coronaviruses, becomes even more apparent”.

As John Bowden and Meghan Sheets write, his comments come amid concerns about the Omicron variant’s effectiveness at evading some of the protection provided by the vaccine, although a majority of those currently hospitalised in the US are the unvaccinated, the CDD has said.

Omicron booster being manufactured by Pfizer

The CEO of Pfizer, Albert Bourla, has said that a vaccine for the highly transmissible Omicron variant of Covid-19 will be ready in March and that the pharmaceutical company has begun manufacturing the doses.

“The hope is that we will achieve something that will have way, way better protection particularly against infections, because the protection against the hospitalizations and the severe disease – it is reasonable right now, with the current vaccines as long as you are having let’s say the third dose,” Dr Bourla said.

As Gustaf Kilander writes, Dr Fauci said in December that a variant specific booster would not be unnecessary because the current booster shots provide enough protection.

Although during a senate committee hearing on Tuesday Dr Fauci said he believed Omicron meant there was an “urgent need” for a so-called super vaccine that would be more effective at preventing new variants of Covid-19 and other coronaviruses.

“We want people to go to RandPaul.com if they want to get rid of Tony Fauci,” said Mr Paul in an appearance on Fox News.

“It is a political thing. He is a political creature. We think he should be put up on charges but he’s not going to until there’s an intervening election. So elections do make a difference.”

The Republican’s counter-attack came after Dr Fauci on Tuesday accused him of “distorting” facts about Covid-19 and the NIAID’s work with the Wuhan institute of virology, who many Republicans have argued was to blame for the virus following gain of function research.

Dr Fauci has described such allegations as “nonsense” and of an “anti-scientific flavour”, with the US having had no known role in the enhancement of coronaviruses in Wuhan’s lab.

Dr Paul continued on Tuesday night by calling Dr Fauci “a menace” and said”: “I think he has lied to the American public. I think that he funded the lab in Wuhan that in all likelihood this virus came from. I think he as ignored natural immunity. I think he has told people to wear a cloth mask when they don’t work”.

Those claims were based on no scientific understanding.

Bernie Sanders calls for KN95 masks for all Americans

The Democrat senator shared a graphic headed “Not all masks are created equal” on Monday, which showed the different levels of protection offered by masks against Covid-19.

Mr Sanders, who has recently become a vocal supporter of issuing KN95 masks for all Americans, tweeted out the graphic amid reports that the US Centres for Disease Control and Prevention (CDC) may soon recommend the higher standard of face mask – rather than a fabric covering.

As Andrew Naughtie writes, KN95 masks were prioritised for healthcare workers at the beginning of the pandemic, and have a different design to standard face masks – so which is best?

Democrat congresswoman Ilhan Omar was among many to champion Dr Fauci on Tuesday for confronting senator Rand Paul for “distorting” information and facts about the US chief medical adviser, and of “making a catastrophic epidemic for your political gain”.

What did Dr Fauci and Rand Paul argue about?

Dr Fauci came to blows with senator Rand Paul during a committee hearing on Tuesday, and accused the lawmaker of “distorting everything about me”.

The National Institute of Allergy and Infectious Diseases told the senator that he was distorting the content of an email about scientific criticism, and kept on “coming back to personal attacks on me that have absolutely no relevance.”

The confrontation came to a head when Dr Fauci accused Mr Paul of attempting to build his personal brand amongst Republicans by fundraising with a “fire Dr Fauci” graphic on his website – with a print out from the senator’s website.

As Meghan Sheets and John Bowden write, the confrontation afterwards went viral on Twitter and follows a long-running feud between Republicans and Dr Fauci:

Dr Fauci says Omicron ‘will ultimately find just about everybody’

Dr Anthony Fauci said on Tuesday that US was approaching the “threshold” of living with Covid-19, and that almost everyone will be exposed to the highly-contagious Omicron variant eventually.

“Omicron, with its extraordinary, unprecedented degree of efficiency of transmissibility, will ultimately find just about everybody,” he said in front of the the Centre for Strategic and International Studies (CSIS).

He said of an endemic: “When we get there, there’s that transition, and we may be on the threshold of that right now”.

His comments came as Omicron spreads through the US, which on Monday reported more than a million cases in 24 hours, and what is the highest known total for cases of an country so far.

Deaths from the virus have meanwhile been averaging at about 1,700 a day, and numbers of those vaccinated against Covid in the US remain below that of comparable countries, as Alisha Rahaman Sarkar writes:

When will the pandemic end?

The Covid-19 pandemic will not end like flipping a light switch off, but according to health experts will come when the world has learnt to live with the virus.

Omicron’s emergence has been a reminder that while vaccines provide strong protection against severe illness, new variants of Covid-19 will to happen “unless we really get serious about the endgame,” said Dr Albert Ko, an infectious disease specialist at the Yale School of Public Health.

“Certainly Covid will be with us forever,” Dr Ko said in an interview with The Associated Press earlier this month. “We’re never going to be able to eradicate or eliminate Covid, so we have to identify our goals.”

As Dr Fauci suggested on Tuesday, that will likely be when each country has reached a point at which vaccines and drugs ensure that Covid cases are easily treatable in persons at high risk.

UK ‘closest to any country’ of Covid becoming endemic

An academic at the London School of Hygiene and Tropical Medicine (LSHTM) has said the UK is among the closest of any country in to reaching the point of Covid-19 becoming an ednemic.

“In general, now, the countries that we know best in the northern hemisphere have varying stages of the pandemic,” said Professor David Heymann.

His remarks come as Dr Fauci suggested on Tuesday that the US was nearing the “threshold” of Covid-19 becoming an endemic, and told a senate committee that would bewhen “there’ll be enough protection in [the] community, enough drugs available”.

As Jane Kirby writes, Covid-19 may not be declared over “until all countries have completed what they need to do to make this virus more tame and to become endemic”.