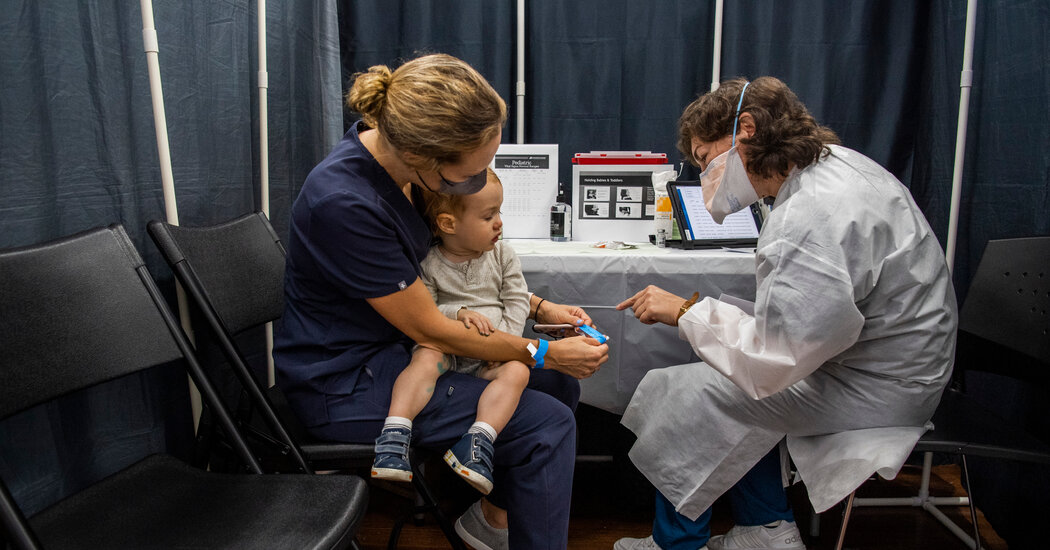 Families in New York City began vaccinating children younger than 5 against Covid-19 on Wednesday after the Centers for Disease Control and Prevention endorsed the vaccines over the weekend.

In a city that was once the epicenter of the Covid pandemic, many parents have been eager to vaccinate the last age group still awaiting shots, the youngest children, and moved quickly to book appointments.

On Wednesday morning, about two dozen parents, some with toddlers in tow and others pushing babies in strollers or carrying them strapped to their chests, arrived at the city-run vaccination hub in Times Square, after Mayor Eric Adams and Dr. Ashwin Vasan, the health commissioner, toured the site.

A health department spokesperson said the Times Square location had about 150 appointments booked for Wednesday, with a capacity for more than 2,500 a week.

One of the first parents in line early Wednesday was Max Bookman, 34, an attorney from the Upper East Side. He carried his 2-year-old, Cara. The pigtailed toddler appeared unfazed beneath her fish-themed mask and didn’t even cry after the shot, instead relishing a round of applause from the onlooking reporters.

Cara was 5 months old when the pandemic began, and Mr. Bookman said she had never been in a grocery store. He was looking forward to finally being able to do indoor activities with her, he said, “all the normal things that kids are supposed to do in their lives.”

On Tuesday, New York City moved from the high risk level for Covid-19 to medium as virus cases and hospitalization rates continue to fall. Broadway theaters will be allowed to drop their mask mandates starting July 1, and Mayor Eric Adams recently removed a mask mandate for toddlers.

Mr. Adams, a Democrat who took office in January, said that New Yorkers were doing the right things to contain the virus, including getting vaccinated, testing and wearing masks, and he said that vaccinating children under 5 was the next step.

“We know there remains no greater defense against this virus than vaccination, which is why we’re pleased that young children are now eligible for the protection they deserve,” Mr. Adams said in a statement on Tuesday.

Jami Wolf, the mother of a 7-year-old son and a 4-year-old daughter who lives in South Slope in Brooklyn, said she was “extremely excited” about the arrival of vaccines for young children.

“We’ve been waiting for this for as long as the pandemic has started,” she said. “I was practically first in line when they rolled out the vaccines for the 5- to 12-year-olds, and I plan to be first in line, so to speak, for this rollout too.”

Ms. Wolf said she had found an available appointment for Wednesday afternoon, although she said the process of finding an appointment on Tuesday had been “frustrating.”

The mayor’s office said that appointments would be available for the city’s vaccine hubs on Tuesday at 9 p.m., but the website did not load until almost 9:45 p.m. Mark Levine, the Manhattan borough president, said of the delays that it was “unacceptable to put parents through this.”

The number of daily cases in the city has dropped to about 2,800, from about 4,300 last month, according to city data, though the real number is most likely much higher because the city’s tally does not include most home tests. About 740 people are hospitalized with the virus in the city.

Some parents said they were more cautious about vaccinating younger children. Andrea Thomas, 35, a mother who lives in Sunset Park in Brooklyn, said that she had “no reservations whatsoever” about vaccinating her 13-year-old son and was more hesitant now about her 4-year-old daughter. Her entire family caught the coronavirus a month and a half ago, giving her daughter some immunity, and she is concerned about possible side effects.

“If she hadn’t just had it, I’d feel differently,” she said.

On Wednesday, Mr. Adams acknowledged that parents may have concerns about the vaccines. “Adult vaccines is one thing,” he said. “Children vaccines, parents are going to have a lot of questions.”

When the C.D.C. recommended the vaccines for very young children on Saturday, the agency noted: “All children, including children who have already had Covid-19, should get vaccinated.”

An earlier version of this article misstated the borough Mark Levine represents. It is Manhattan, not Brooklyn.