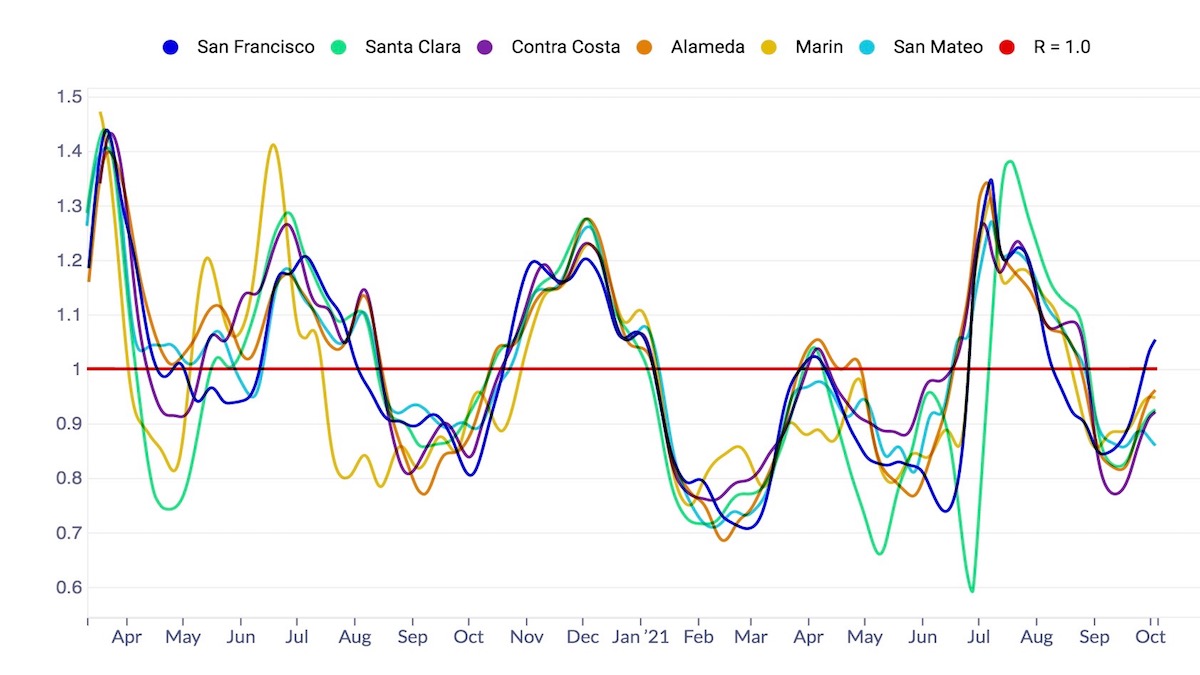 Infection numbers, hospitalizations and positivity rates remain static, and some R Number models show San Francisco rising above 1 for the first time in over a month.

Is the virus in retreat? Infection and hospitalization numbers are generally falling around the country. Cue a collective sigh of relief. Because of The Vaccine and natural immunity, some think we won’t see the kind of spike we saw this summer again this winter, and others see this surge as covid’s last hurrah. That may be true, but don’t close the windows or throw away those masks just yet. The ebb in highly vaccinated SF has been slow, and the virus has an excellent track record of confounding the experts.

What is unlikely to fade away anytime soon is the degraded and dysfunctional public health infrastructure here and around the world. In 2019, the Global Health Security Index ranked the U.S. No. 1 in terms of national capacity to prevent, detect, and respond to infectious disease outbreaks. What went wrong? Here’s a good piece focusing on jails/prisons, nursing homes and schools.

And here’s a companion piece critiquing the medical industry’s revenue maximizing operating procedures. A health care system driven by profit is unlikely to produce a great deal of trust.

Stay in touch with our neighborhood.

Speaking of health care for profit, how about Big Pharma’s latest miracle pill, being promoted as a covid “game changer?” Like The Vaccine, and other “miracles of the market,” this drug was made possible through public funding. And now the public will pay again. The contract between the USG and Merck will cost $712 per treatment course, while production costs are only $20.

Some readers evidently believe that a goal of endemicity, a stage when the virus is not eradicated but becomes manageable, means giving up. New Zealand, which had been on a Covid Zero track for the past 18 months, now seems to agree that eradication at this point is unachievable.

Scroll down for today’s covid numbers.

The U.S. Centers for Disease Control data used for the chart lags behind the data supplied from the San Francisco Department of Public Health. As of Oct. 5, DPH reports more than 80 percent of all San Francisco residents have received one dose, and 75 percent are completely vaccinated. New vaccinations, though low, keep on truckin’. On Oct. 5, the seven-day rolling average of shots per day was 226. For information on where to get vaccinated in and around the Mission, visit our Vaccination Page.

Are hospitalizations “decoupled” from cases? Since peaking in mid-August, Delta hospitalizations have fallen about 48 percent but have been fluctuating in the 60s for over two weeks. The ICU population remains, as it has been since Sept. 16 between 20 and 26. On Oct. 2, DPH reports there were 63 covid hospitalizations, or about 7.2 per 100,000 (based on an 874,000 population).  DPH says it has “temporarily pausing our reporting of breakthrough hospitalizations and deaths to conduct a thorough review of data quality and completeness.” The last update said 77 fully vaccinated San Franciscans had been hospitalized (a rate of 12.6 per 1,000 cases, compared to 85.1 per 1,000 cases for those not fully vaccinated).   According to the CDC, there were 51 new admissions for the week ending Oct. 3  (up 18.61 percent from the previous week, which seems high). For the week ending Oct. 3, covid patients accounted for 3.46 percent of hospital beds (no change from the previous week) and 8.84 percent of ICU beds (no change from the previous week). As of Sept. 27, the CDC says that, of more than 183 million vaccinated U.S. residents, 22,115 patients with a covid vaccine breakthrough infection were hospitalized or died (though 17 percent of deaths  and 18 percent of hospitalizations did not have symptoms of covid, or their hospitalization or death was not covid-related).

As we’ve known since the beginning of the pandemic, racial and ethnic minorities have been hit hardest by the virus, in much greater numbers than their share of the population. San Francisco’s DPH doesn’t report on income inequality, but the latest from  the California Department of Public Health shows the case rate for communities with median income <$40K is 33 percent higher than statewide rate.

From a peak of 6.2 percent, the 7 day rolling Citywide positivity rate has dropped approximately 75 percent, to its lowest level since July 5.

Covid-related deaths in San Francisco are always difficult to figure. DPH added 3 more deaths in September, bringing the Delta total (August and September) to 63 so far, and the cumulative covid-related death toll to 639. According to DPH, over half the deaths were among persons over the age of 80 with nearly all are over the age of 60. Less than 3 percent had no known underlying condition. DPH last reported 11 deaths of fully vaccinated San Franciscans “that are due to complications from COVID-19.”

R Number models, always fluctuating and seldom in agreement, don’t all reflect the opinion that the virus is backing down. Covid R Estimation has raised its most recent San Francisco R Number to 1.02 , over 1 for the first time since August 10. It also raised its current estimate for the California R number to .90. The ensemble, though less alarmist, also raised its average  San Francisco  R Number to .88 while raising its California average to .84. All models in the ensemble continue to show state rates of transmission below 1, but two of the models show SF over 1.