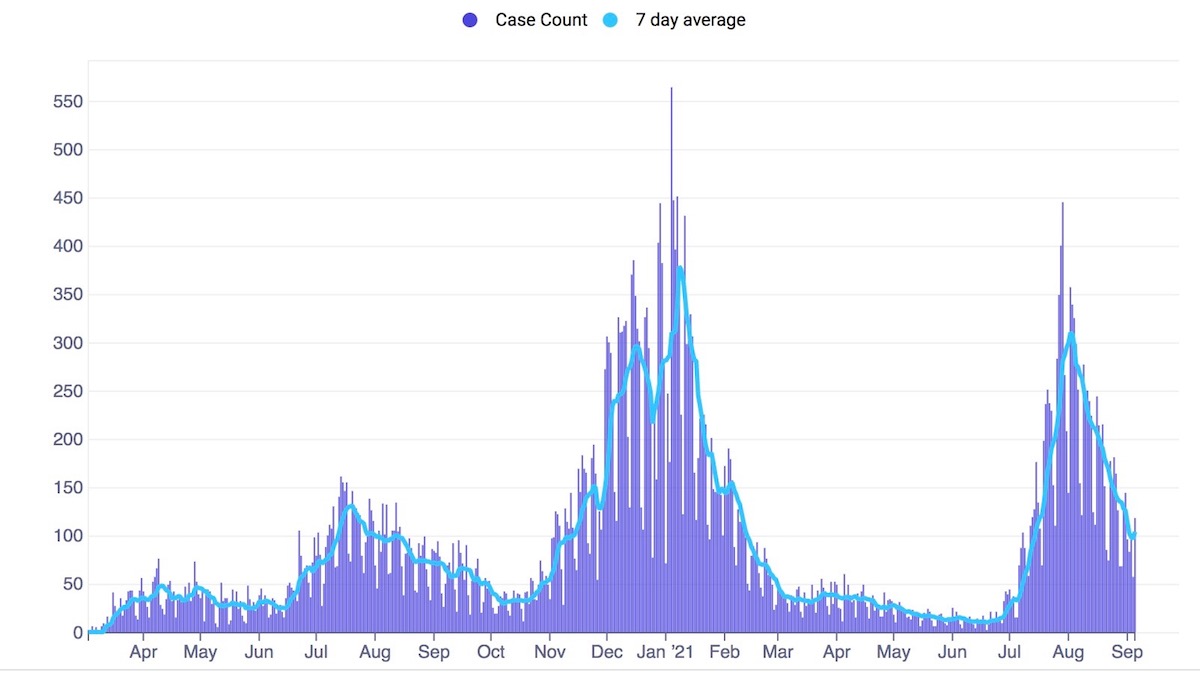 The numbers keep coming down even as frustration with the unvaccinated (not you kids) rises.

No more Mr. Nice Guy? A noticeably frustrated Joe Biden dished out a slew of vaccine mandates after pretty much blaming the unvaccinated for a virusy summer. Here’s a good summary of the substantive steps, with some extra points Joe left out.

Biden is not alone in his frustration. The UCSF Grand Rounds docs could barely disguise their own annoyance and impatience with a variant who keeps hanging around.

We’d all love to move on (to wildfires and hurricanes).

You may have read that elsewhere, particularly in low vaccinated areas, more kids are coming down with the virus, and some seriously. Not here in San Francisco where feared school outbreaks have, so far, failed to materialize.

Stay in touch with our neighborhood.

Speaking of schools, remember a couple weeks ago the SFUSD found the time and money to outfit unventilated classrooms with air purifiers? A good, and long overdue, move. But hold on. Does anyone know what kind of air purifiers they bought? It turns out not all purifiers actually purify. Especially problematic are the new electronic machines being widely hyped. Rather than test their machines, the companies hired celebrity salespeople, like former high priests of “publich health”, Deborah Birx and Robert Redfield.

Lost among the vaccine mandates were Biden’s proposals to increase rapid testing. Fast accurate tests that don’t require days of delay should be a no brainer (so why didn’t the previous maladministration develop them?). Rapid testing, along with protections and support for isolating positives, is considered a “pubic good” in Germany. It also works.

And as frustrated as we are with Delta, consider the rest of the world, or just listen to the head of the WHO, who heard the prez promote boosters last night while failing to mention the shocking and dangerous lack of vaccination throughout Africa and South America.

Scroll down for today’s covid numbers.

The CDC data used for the chart lags behind the data supplied from the San Francisco Department of Public Health. Here, the vaccination picuture has been relatively static for at least a month or more. As of Sept. 9, DPH reports about 79 percent of all San Francisco residents have received one dose, and more than 73 percent are completely vaccinated. Despite the proven protection, the City’s unvaccinated have been less than enthusiastic about embracing The Vaccine . On Sept. 9, the seven-day rolling average of shots per day dropped again to  333. Latest SF data (see below) suggests unvaccinated residents are about 3 times more likely to get infected, and if infected 6 times more likely to wind up in the hospital. For information on where to get vaccinated in and around the Mission, visit our Vaccination Page.

Our hospital graph is slow to update. It should be up soon. On Sept. 6, DPH reports there were 87 hospitalizations, 61 in acute care, 26 in the ICU.  The latest update from DPH says 76 fully vaccinated San Franciscans have been hospitalized (a rate of 14.3 per 1,000 cases compared to 84.8 per 1,000 cases for those not fully vaccinated) . According to the CDC, there were 47 new admissions for the week ending Sept. 7  (-22.97 percent drop over the previous week). For the week ending Sept. 6, covid patients accounted for 4.97 percent of hospital beds (-.073  percent from previous week) and 10.70 percent of ICU beds (-2.33 percent from previous week). As of Aug. 30, the CDC says that of 173 million vaccinated U.S. residents, 12,908 patients with a COVID-19 vaccine breakthrough infection were hospitalized or died. Of that number 25 percent either had no covid symptoms or their hospitalization or death was not COVID-related

The neighborhood in the City with the highest case numbers and postivity rate is also the most vaccinated. As of Sept. 8, an estimated 88 percent of Bayview Hunters Point residents have had at least one vaccine dose. Of thirty-eight City neigborhoods, the one with lowest vaccination rate (43 percent residents receiving at least one dose), Lakeshore, had the ninth lowest case rate but the 11th highest positivity rate over the past two months. Between July 7 and Sept. 5, the Mission had  804 new cases (a rate of 137 new cases per 10,000 residents),  and a 4.6 percent positivity rate.

As of Sept. 9, DPH estimates over 90 percent of Native American and Pacific Islander residents had received at least one dose of The Vaccine, Asians 80 percent, Latinxs, 80 percent, Blacks 68 percent and Whites 68 percent.  DPH has no figures on Multi-racial vaccination rates.