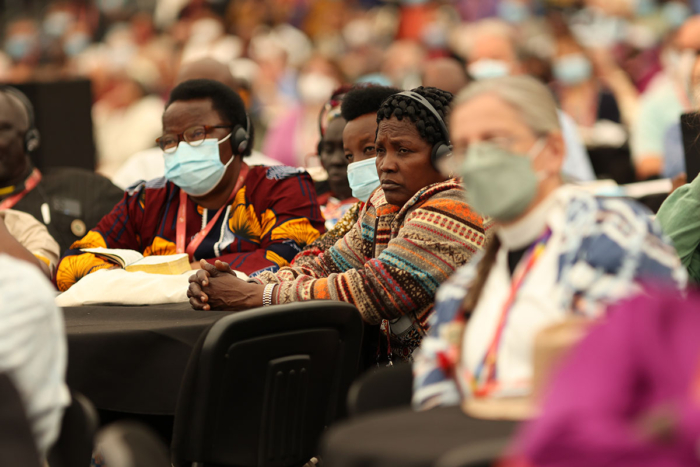 [Episcopal News Service – Canterbury, England] Compare photos from the Lambeth Conference and General Convention in July and you’ll notice that the masks covering every face in Baltimore came off, for the most part, in Canterbury. Although there has been little change in the risk of contracting COVID-19 between General Convention and Lambeth, the norms at this conference are noticeably different.

So far, however, the results appear to be similar – with some caveats. Out of about 1,200 attendees at the four-day General Convention, 32 reported testing positive. By Aug. 5, the 10th day of the Lambeth Conference – with roughly the same number of attendees – 43 people reported testing positive, according to Anna Drew, media center lead for the Lambeth Conference media team.

Twelve Episcopal bishops have reported testing positive during the conference, according to Amanda Skofstad, public affairs officer for The Episcopal Church. Among them is Michigan Bishop Bonnie Perry, who tested positive three days into the conference despite being one of very few bishops to double-mask indoors. She has had very mild symptoms and is now participating in the conference in person again, having completed her five-day isolation. Her spouse, Susan, has had worse symptoms, such as a deep cough. 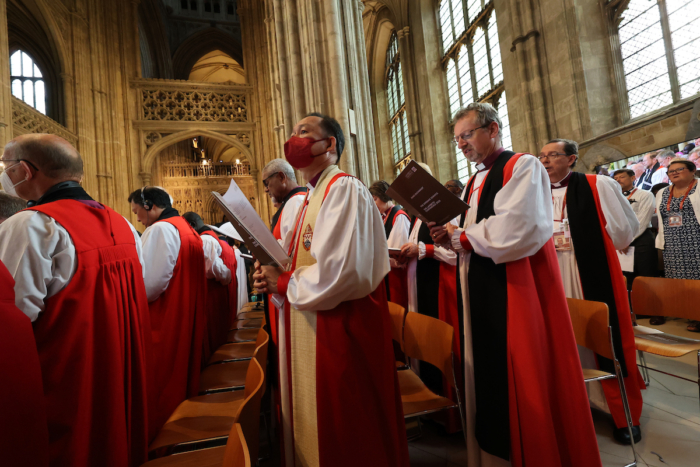 “I missed the opening Eucharist,” she told Episcopal News Service. “I missed the women’s dinner. I missed the big Tuesday conversation [about the Call on Human Dignity]. I missed [the trip to] Lambeth [Palace].”

Although this is her first bout with COVID-19, Perry – who was consecrated in February 2020 – found the experience of isolating at Lambeth somehow familiar.

Although she wishes she had been able to enjoy more of the social atmosphere, when it came to the Aug. 2 discussion on same-sex marriage, “it was really clear to me that I didn’t need to be in the room,” she said. “People had it. It was lovely.”

Perry added that she is “sad that we have not taken more precautions,” especially compared to General Convention, where strict COVID-19 protocols were enacted in response to deputies’ concerns. Proof of vaccination was required to attend, masks were required in the convention halls at all times, and all attendees were instructed to self-test daily. The conference was shortened from eight days to four, and visitors and exhibitors were not allowed. 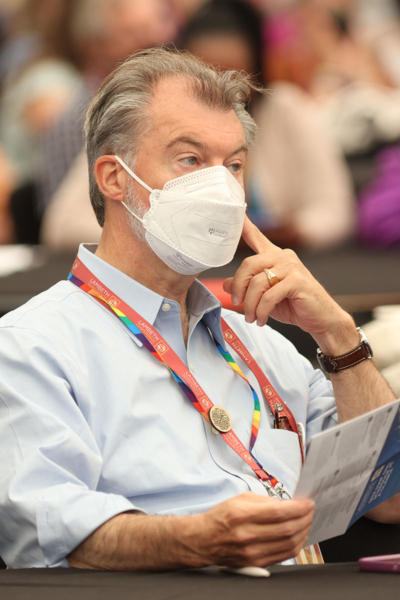 Bishop Mark Eddington of the Convocation of Episcopal Churches in Europe wears a mask during an Aug. 5 session. Photo: The Lambeth Conference

Before Lambeth, bishops were sent a document outlining the conference’s approach to COVID-19. England currently has no COVID-19-related mandates or restrictions, nor does the University of Kent. Attendees have not been required, or even requested, to wear masks indoors. Bishops were encouraged, but not required, to test upon arrival in Canterbury. Self-tests and masks were provided in the rooms of attendees staying on campus.

For the trip to Lambeth Palace on Aug. 3, bishops were instructed to test themselves in the morning before departure and to “consider wearing a face mask on the bus.”

If a bishop tests positive for COVID-19, they are requested to isolate in their accommodation for five days, with meals delivered on request.

On-site medical staff are available 24/7, including to help with testing.

“We respectfully ask that delegates are considerate of others who may feel differently about the risks of COVID-19,” conference organizers wrote. “We invite you to engage with the conference in the way you feel most comfortable.”

In England, the current seven-day daily average of reported cases is 15 per 100,000, compared to 36 in the U.S. Reported cases in the United Kingdom have declined by 53% over the last two weeks.

At the start of the conference, very few bishops were masking, but it has gradually become more common as cases have grown.

One bishop who has been masking the whole time is California Bishop Marc Andrus, who had a stroke in October 2019, putting him at higher risk for complications from COVID-19.

Andrus told ENS his blood is “hypercoagulable” – a term he didn’t know before his stroke – which means it is likelier to form clots. He also has a hole in his heart, which is present in all newborns but typically heals within a few months. 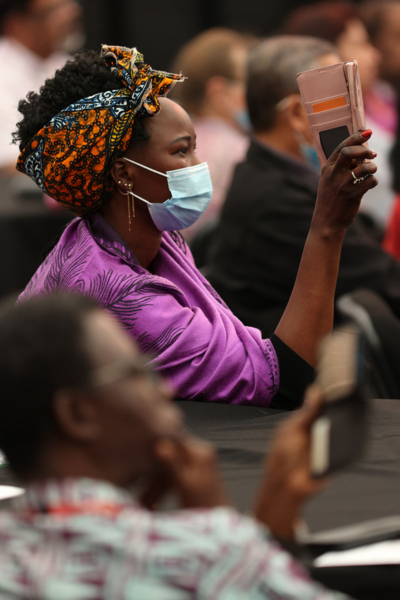 A spouse wears a mask while recording video on her phone during an Aug. 5 session. Photo: The Lambeth Conference

When the hole lasts into adulthood, it’s usually not a problem. But when combined with blood clots, Andrus explained, it can cause a stroke, or a pulmonary embolism – which he also had 13 years ago.

Andrus and his wife, Sheila, live in San Francisco, which had some of the earliest and most aggressive protective measures of any large city.

“We’ve been very, very careful as a region,” he said. “We know that lives have been saved.”

Even so, Andrus said, “this is an evolving pandemic. It’s changing. New variants are emerging. … And the idea that they’re all going to be not as deadly as the earliest variants – we don’t know that either. So the prudent thing seems, to me, to do what we know we can do.”

Knowing the risk he faces, Andrus said he is especially aware of the differences between Lambeth and General Convention. The precautions in Baltimore, he said, “were seen as draconian by some people. I was glad for them.”

Sheila Andrus also masks indoors, mostly to protect her husband. She told ENS she sees it as an act of love and respect.

“I really see the mask as going two ways, because you can have COVID and not have symptoms,” she said. “So if I care for others, when I put a mask on, I’m not only protecting myself but protecting someone else. Being here, my awareness of Marc’s vulnerability is just a major priority.”

As to why most bishops are not wearing masks, Andrus suspects it’s contextual: that they are less inclined to mask because it is less common in their home communities. Still, he doesn’t feel animosity toward the majority of bishops who have chosen not to wear masks.

“I want to acknowledge that there are psychological costs for many people about wearing masks,” he told ENS. “We’ve talked to people who have [something] close to panic attacks wearing the mask. Some people feel very isolated by wearing the masks; they can’t read social cues. If they’re hearing impaired, that’s a real problem. I understand that. I’m not judging people.”

– Egan Millard is an assistant editor and reporter for Episcopal News Service. He can be reached at emillard@episcopalchurch.org.