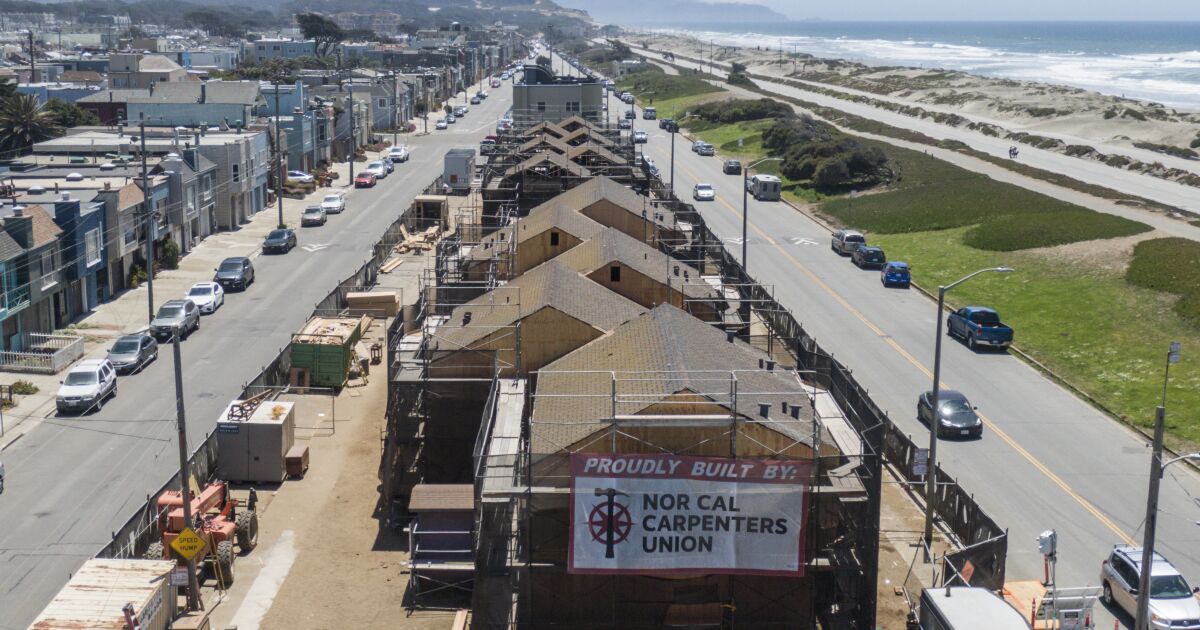 Senate Bill 6 and Assembly Bill 2011 incentivize housing projects in commercial corridors otherwise zoned for large retail and office buildings as a way to help California fill a multimillion-unit shortage in its housing supply. Both bills guarantee union-scale wages and promise an expedited construction process, while keeping development close to city centers to help the state meet its environmental goals and avoid sprawl.

“I think what makes today a special day is this is a big moment as we begin… to take responsibility, not to give the same speech and expect the same applause, but to begin to do something about it,” Newsom said during a news conference in San Francisco to sign the two proposals and dozens of other measures. “This is a big package. These bills matter.”

Gridlock among several opposing forces in the Capitol — where unions, developers and affordable housing groups regularly stall legislation over disputed labor standards — nearly capsized this year’s historic deal. The powerful State Building and Construction Trades Council of California backed SB 6, along with builders and business groups, while the California Conference of Carpenters and the Service Employees International Union of California broke from other labor groups to support AB 2011.

“Every organization took a position that benefited them the best and decided which bill they wanted to support. And part of the challenge there is that each coalition of people were ready to have the other bill die in order for their bill to be successful,” said state Sen. Anna Caballero (D-Salinas). “The problem was that you couldn’t get to that perfect middle with some of the groups. They just wouldn’t go there.”

Despite the energy and effort required to pass the bills, both Caballero and Assemblymember Buffy Wicks, an Oakland Democrat who wrote AB 2011, said they’re willing to broker a future deal on similar legislation.

“Today we are taking a monumental step in our efforts to turn our housing crisis in a different direction,” Wicks said in a statement. “The governor’s signature on AB 2011 marks a turning point for California’s housing production needs — no longer will lack of land be an issue. No longer will there be a lack of incentive for workers to join the construction workforce. And, no longer will red tape and bureaucracy prohibit us from building housing in the right locations to address our climate crisis.”

Experts say the impact on California’s housing supply could be significant.

Caballero said SB 6 will help rural communities recover from a big chain store exodus that left behind a trail of vacant buildings and parking lots. She sees the new law as a way to produce housing for first-time buyers.

An August analysis by UrbanFootprint, a software platform that analyzes city data for urban planners and local governments, found that the new law could produce 1.6 million to 2.4 million new homes, depending on market conditions, including hundreds of thousands of affordable units.

“AB 2011 has tremendous potential to unlock … a ton of land for development that was previously off limits,” said David Garcia, policy director for UC Berkeley’s Terner Center for Housing Innovation. “It’s a huge deal.”

Garcia said he sees both bills as a sign that lawmakers in Sacramento are taking a stronger “pro-housing approach” and are willing to push for the kind of legislation that is notoriously difficult to pass amid interest group infighting.

Ray Pearl, executive director of the California Housing Consortium, one of the co-sponsors of AB 2011, called the measure a “game changer.”

“It’s really unprecedented that we brought together all of those different groups. As you look forward, nothing is ever easy in Sacramento, nor should it be,” Pearl said. “But there are a lot of folks that want similar outcomes. Hopefully, we are going to be able to use this coalition for future efforts.”

“These are opportunities for young people who really, really need the opportunity,” she said.

To finalize a deal, Caballero and Wicks worked together to craft two bills that promised each coalition a slice of the pie.

“As the clock started ticking down, we both agreed we would make some amendments that would give each one of us what we wanted,” Caballero said, even if that meant “everybody was a little bit unhappy” with the final product.

The Assembly bill includes a requirement for union-scale wages, along with stringent environmental standards and a mandate that a certain percentage of the units be affordable for low- and extremely low-income residents.

Some projects would be exempt from local governments’ discretionary approval process as well as the restrictive California Environmental Quality Act, which has been used as a legal weapon to slow down or even halt housing construction.

The labor requirement ensures that contractors provide healthcare benefits and union-level pay, so-called prevailing wages, to all workers, even if some aren’t unionized. Contractors have argued that prevailing-wage requirements drive up costs and housing prices.

The Senate’s version was billed as a “middle-class” housing proposal, and requires the union-scale wages as a minimum labor standard while ensuring that a so-called skilled and trained workforce is used in most situations. The additional regulation guarantees most workers are unionized.

The cautious optimism about future legislative housing agreements could be short-lived, however.

Lehane said the trade unions remain concerned about most residential housing construction projects, especially those not using union workers, because those builders are “paying and treating workers unfairly.”

“I think that is not something that changes overnight,” she said. “As our responsibility, we need to remain ever vigilant to that.”

The new laws will go into effect July 1.