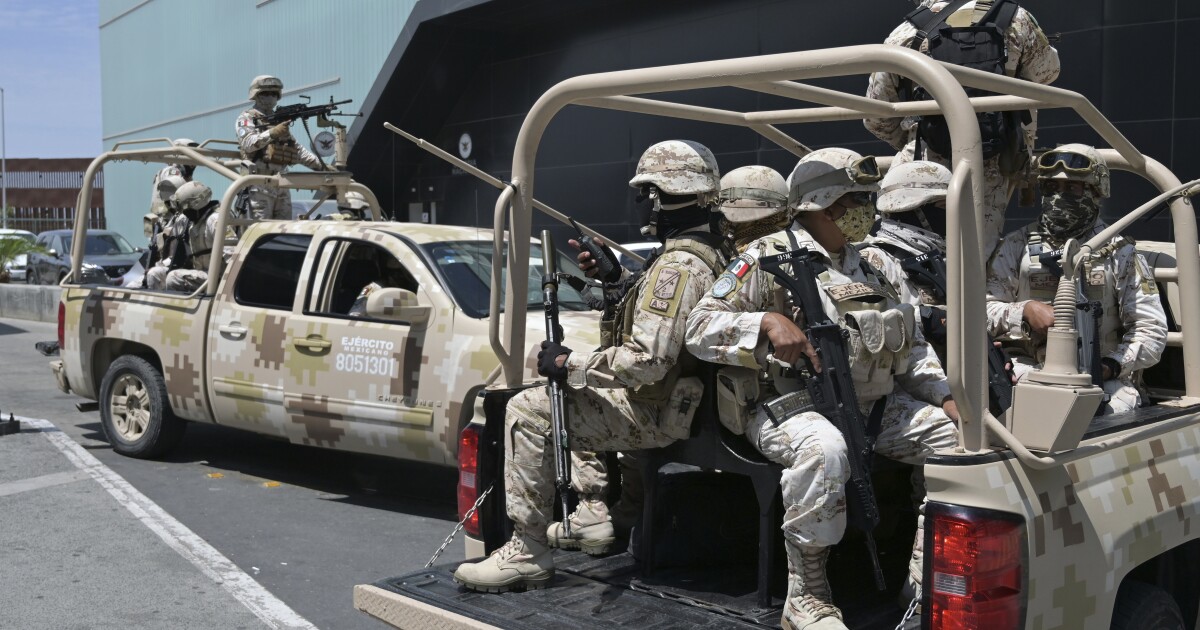 As Mexican national guard troops patrolled the streets of Tijuana and cruise lines canceled dockings in Ensenada over fears of violence, Baja California residents struggled Sunday to return to normal life after hooded bandits associated with criminal cartels effectively shut down much of the region Friday.

State officials said the assailants hijacked and burned at least two dozen vehicles and put up roadblocks around the state Friday evening. Messages also began circulating on social media, purportedly from the Jalisco New Generation cartel, declaring a curfew in Tijuana and warning residents to go home or risk being attacked. Many did, turning the normally frenetic zone of restaurants and bars around Avenida Revolución into a virtual ghost town.

By Saturday afternoon, hundreds of military troops and special forces had arrived in Tijuana to help restore order and reinforce security. Some 300 troops, along with 50 members of the national guard, were flown in to support 3,000 national guard troops and the 2,000-strong Tijuana police force that, according to the mayor, were already patrolling.

Just before noon Sunday, the U.S. Consulate in Tijuana announced on Twitter that it had rescinded an order issued Friday night that U.S. government personnel shelter in place.

One person was reportedly injured in the violence but no one was killed, according to government officials and news reports. It was the third time in a week that cartels unleashed widespread mayhem in cities across Mexico.

Days earlier, at least 11 people were killed in Ciudad Juárez, across from El Paso, in a series of attacks that targeted convenience stores, gas stations and a pizza shop. Drug cartels also set fire to dozens of shops, buses and cars and blockaded major roadways in the states of Jalisco and Guanajuato. Authorities in those states reported one fatality.

Federal officials said 17 suspects had been detained in connection with the violence, including seven people in Tijuana and four each in Rosarito and Mexicali.

It was unclear how, or whether, the events were related. Officials said the rampage in Ciudad Juárez came in retaliation for a prison riot there, while the chaos in Jalisco and Guanajuato was unleashed by leaders of the Jalisco cartel angry about plans to arrest them.

The shutdowns in Baja, which affected Tijuana, Tecate, Mexicali, Ensenada and Rosarito Beach, were reportedly at the hands of the same cartel, but other connections were not immediately known.

Local officials vowed not to be intimidated.

“Today we are saying to the organized crime groups that are committing these crimes that Tijuana is going to remain open and take care of its citizens,” said Tijuana Mayor Montserrat Caballero in a video message Saturday. She also asked “organized crime,” the term in Mexico for drug cartels, “to settle their debts with those who didn’t pay what they owe, not with families and hard-working citizens.”

On Saturday, the morning after much of the violence, many of Tijuana’s streets appeared virtually empty. Many buses had stopped running, leaving workers stranded.

In Rosarito, attendees of a popular music festival, the Baja Beach Fest, were caught up in the chaos.

“I left Baja Beach Fest about an hour ago,” Alexis Hodoyán, the music editor of Remezcla, said on Twitter just after midnight Saturday. “There was no signal. Festival goers probably don’t know what’s happening. There’s no way everyone at the festival is staying in Rosarito. Taxis aren’t going into Tijuana … this is going to be chaos.”

About 12 hours later, she reported that she was driving through Tijuana to return to San Diego. “Most businesses are open and things seem normal,” she tweeted, “except for the considerable reduction in vehicular traffic, which has been notoriously horrible in the city the last couple of years.”

“We’re definitely fearful about what happened and the possibility of losing a vehicle, having it burned, but we also feel that public transportation is a responsibility that we have,” he said, adding that it seemed like the criminal groups weren’t looking to hurt anyone, but rather trying to make a statement or issue a warning.

By Sunday, many restaurants that are part of Tijuana’s famous food scene had reopened their doors.

“We are open; everything is normal,” said a woman answering the phone at La Espadaña, a popular restaurant in Tijuana. She added, however, that the restaurant would be closing earlier than usual because of the mayhem.

At the restaurant Casa Tijuana Project, a person answering the phone seemed confused by questions about mayhem. The restaurant was open; was a reservation desired or not?

Still, life was far from normal — a fact made clear to cruise ships that had been scheduled to dock at Ensenada.

“Is the Radiance docking today in Ensenada?” one person asked on Twitter. “My parents are on the ship.”

Carnival Cruise Line’s Twitter account answered within minutes. “Due to recent local unrest,” it wrote, “the Carnival Radiance will cancel the call in Ensenada.”

“LOL,” added someone else. “I’m on a cruise to Ensenada for work and they aren’t letting us off the boat now.”

David Shirk, a University of San Diego professor who follows organized crime in Mexico, said these sorts of events underscore the notion that, in many ways, organized crime calls the shots when it comes to security in Baja California.

Even though nobody was killed, the violence, Shirk said, further erodes public trust in government and law enforcement authorities designated to protect them and combat organized crime.