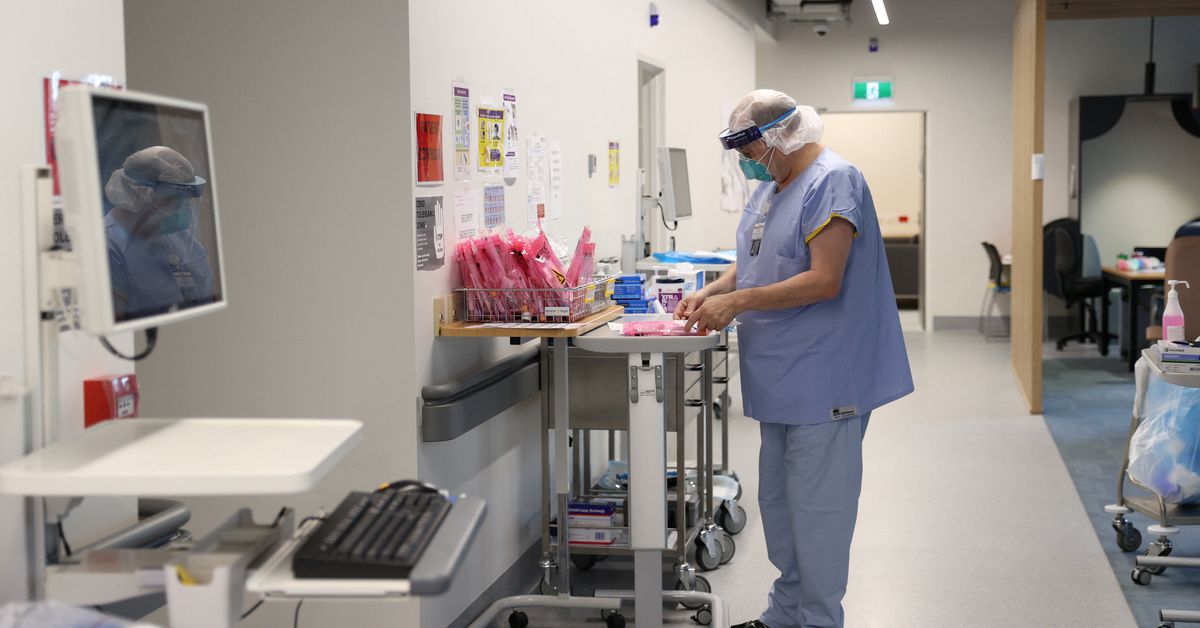 A nurse prepares to test patients for the coronavirus disease (COVID-19) in a clinic at Westmead Hospital in Sydney, Australia, May 12, 2020. REUTERS/Loren Elliott

SYDNEY, Jan 14 (Reuters) – COVID-19 hospitalisation rates in Australia’s most populous state of New South Wales could plateau next week, a top health official said on Friday, as the state suffered record deaths from the virus for a third day.

Pressure on hospitals will likely remain for “the next few weeks”, the state’s health deputy secretary, Susan Pearce, said, though hospitalisation numbers were tracking better than the best-case scenario in an official modelling a week ago.

“That is pleasing, but that plateauing is obviously still at a relatively high level of COVID patients in our hospitals and in our (intensive care),” Pearce told a media briefing in Sydney, the state capital.

The surge in cases fuelled by the Omicron variant has piled pressure on hospitals, which are grappling with record admissions, and on other sectors of the economy.

With staff shortages beginning to disrupt supply chains, authorities have eased quarantine rules to allow thousands of close contacts of cases to return to work in the transport and freight industries if they are asymptomatic, an extension of exemptions that had earlier applied to food production staff.

But this has raised fears workers will be placed in riskier environments.

“Essential workers are being forced to put themselves in harm’s way to keep food on the shelves, medicines in stock, the lights and water on and keep this country open for business,” Australian Council of Trade Unions secretary Sally McManus said in a statement.

Australia successfully restricted outbreaks of the coronavirus for most of the pandemic but it now finds itself in the grip of a wave driven by the Omicron variant following the relaxation of restrictions when vaccinations became widespread.

Of Australia’s nearly 1.4 million infections recorded since the pandemic began, about 1.2 million have been detected over the past four weeks.

Australia reported 56 deaths by mid-day on Friday, with 29 of them in New South Wales, its biggest ever COVID-19 toll.

Other parts of Australia, largely virus-free until early December, are also hitting record caseloads. A month ago, Queensland reported a day with four new cases; on Friday it recorded 23,630, a state record.