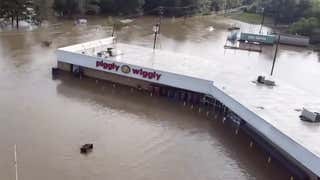 A child and three young adults are dead and dozens of people had to be rescued from homes and cars after several inches of rain fell on parts of Alabama.

The death toll rose to four Thursday afternoon after two people who had been missing in Hoover, just south of Birmingham, were found dead, local fire department confirmed.

The other two deaths happened in Marshall County, the local coroner’s office said in a Facebook post Thursday morning.

The child, 4 years old, died in flash flooding in Arab, about 25 miles south of Huntsville, according to a previous post. The body of the teen was found Thursday morning on a road in the nearby Union Grove area. No other details were given.

The Arab Tribune reported that the child was swept away from a flooded car. Emergency officials said several roads were closed or damaged in the western part of Marshall County and residents were urged to avoid travel.

(MORE: Fall Can Be a Secondary Peak Time For Tornadoes)

Rescuers searched overnight for the two people in Hoover who were in a vehicle that was swept away around 8:30 p.m. Wednesday. First responders were working other calls in the area when the vehicle was caught up in floodwaters, Duane Prater, division chief for the Hoover Fire Department, said in a news briefing Thursday morning.

“The vehicle was immediately picked up and pinned against the guardrail, trapping the occupants,” Prater said.

Rescuers were unable to reach them.

“Within a couple of minutes the rushing water pushed the vehicle over the guardrail and out of sight of responders,” Prater said. “Crews worked throughout the night but were unable to locate the vehicle or occupants.”

The department later announced that divers found the vehicle around around 9 a.m. Thursday, with the two bodies still inside. The fire department said they were a man and a woman, both aged 23. The Associated Press reported that they were boyfriend and girlfriend.

More than 80 people were rescued from flooded homes in nearby Pelham, according to the Pelham Fire Department. About 15 others had to be pulled from cars that got stuck in floodwaters. More than 100 first responders from 15 agencies were involved in the rescues and a dozen boats were deployed.

Parts of the Birmingham area picked up 6 to 10 inches of rainfall. Some areas southeast and east of Huntsville saw more than 6 inches.

“We’re hoping that the rain is going to stop so we can get some of this water … out of here and we can start getting into these businesses that have taken on water to see what we can do to help them,” Sheriff Heath Jackson told WKRG-TV.

Officials in Baldwin County said much as 250,000 gallons of waste water overflowed from sewage systems along Mobile Bay, The Associated Press reported.

Flooding was also reported in the Florida Panhandle, where cars were stuck and homes surrounded by water in some areas.

Several roads were closed in Bay County, Florida, and personnel at Tyndall Air Force Base were told not to report to work until given the all clear that roads were safe.

The worst of the rain is over for Alabama, but flooding remains a threat in some parts of the state and into the Florida Panhandle.

The deaths in Alabama bring the total number of people killed this year in flooding in the U.S. to 138, according to numbers tracked by the National Weather Service. That’s the highest since 2017, when heavy rainfall from Hurricane Harvey led to deadly flooding in Texas.

The Weather Company’s primary journalistic mission is to report on breaking weather news, the environment and the importance of science to our lives. This story does not necessarily represent the position of our parent company, IBM.